We’re very pleased to report that we’ve received a Thinking Blogger Award from Thought, Interrupted by Typos.   We’ve been thinkers for some time, but we’re really new to the blogging, so it’s especially nice to be appreciated! Thanks, Thought!

The rules are as follows:

It’s taken us a disgracefully long time to figure out 5 blogs to link to, and to work out how to put our award up.  (Actually, even formatting all the links was a struggle.  We’re new to this.) But now we’re finally ready!  Here are our five somewhat eclectic choices: 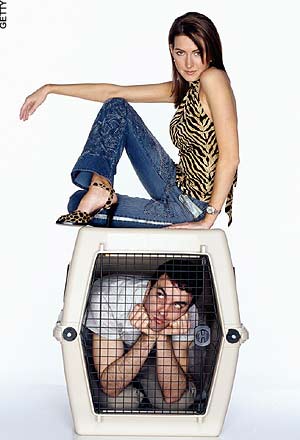 This Fay Weldon article, “Bag yourself a ‘must have’ male” initially sounds like another one to help Monkey in her quest for a rich man. But no, it actually addresses quite a different issue: how men are debasing themselves now that women have all the power. You might think the claim that women have all the power would be the main story– it’s news to me, certainly. But instead it’s not even argued for, just assumed:

The gap between men and women has narrowed so much over the decades that the sexes are intrinsically the same, and it’s happening so fast that it makes us uneasy. Equal pay, equal opportunities, Health and Safety makes wimps of us all… what’s the difference between the male and the female? Except, of course, that women occupy the moral high ground, live longer, look better longer, are more employable and need men less than men need women.

The result of women having all the power?

Now women want to be stick-like and beautiful to please themselves or impress other women – not men. Women like to have partners: they don’t need to have partners. And so it is the man who has to make the effort to please.

And what does the man do? He uses hair products and cosmetics, diets, and has surgery– all in a desperate quest to please. Heck, he’ll even climb into the cat carrier if that’s what she asks. (Maybe that’s why folks care about the sex of their vets?) Damn, it’s good to be a woman. So, why am I even bothering with this rubbish, completely unsupported as it is by any facts or arguments? Because it’s useful to look at the trope it employs. It takes for granted the claim that women have all the power, smuggling it into the supposedly shared background of the conversation. (The bit about men debasing themselves isn’t like this: stats are given re male plastic surgery.) It becomes impossible to understand the article if one doesn’t take the presupposition on board. The cooperative, well-trained conversationalist (which nearly all of us are) has to fight rather hard to avoid taking on presuppositions like this (see David Lewis on scorekeeping). It’s a powerful technique.Also, it’s important to realize that lots of people *do* share the background presuppositions of the article. This is what we’re starting from with lots of people, including our students, and that’s worth bearing in mind. (Many thanks to S for enriching my life with this one!)