It seems one of the most successful pirates of all time was a woman. 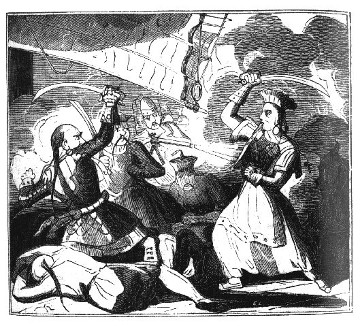 In fact, Cheng I Sao was eventually responsible for nearly all the piracy in the region and her fleet exceeded the size of many countries’ navies. She also expanded the scope of the business, branching out from simple attack-and-pillage jobs to protection schemes, blackmail, and extortion. Cheng I Sao’s reach also extended to the mainland, where she set up an extensive spy network and developed economic ties with farmers who would supply her men with food.

Either an exception or a counterexample to the “men explorers/women cuddlers” claims, depending on your perspective. Sadly not, however, the best of feminist role models:

Ironically, Cheng I Sao’s most famous laws applied to the taking of female prisoners. Ugly women were returned to shore, free of charge. Attractive captives were auctioned off to the crew, unless a pirate personally purchased the captive, in which case they were considered married.

Fascinatingly, CNN filed this one under “living/worklife”. Many thanks to lydia for passing this one on to me!