A few days ago I mentioned the woman who was raped by Halliburton co-workers in Iraq, then imprisoned by the company without food or water for 24 hours and not allowed to phone her family.  Congress is now planning to investigate the case.  (Thanks, Jender-Parents!)

Former Tory cabinet minister John Redwood was condemned by victim support groups last night after he said the government was wrong to regard “date rape” as seriously as assaults by strangers.
Redwood said that Labour’s “doctrine of equivalence” had “led to jury scepticism about many rape claims” and added: “Young men do not want to have to take a consent form and a lawyer on a date.”

It will be very interesting to see the reaction of Redwood’s party leader, David Cameron, who has been rather more impressive on the issue. (Thanks for letting us know about this, Ross!)

Filed under:  I don’t think so. 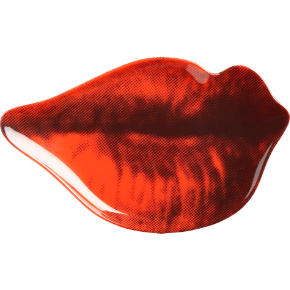 I.e., these are small plates.

This product comes from cb2, which it considered a “really cool store”, my young New York friends say, though just about everything said like that is ironic.  Fortunately.

1.  On punishing the victim:  Saudi King Abdullah has pardoned the woman who was gang raped 14 times, in a Wonderland case where it is one crime for a woman to be alone with a male non-family member and another one to protest a harsh sentencing.

2.  On consent of ten year old to sex with nine: Nine young men who confessed to having sex with a ten years old were allowed to walk free since the prosecutor decided that it was probably consensual.  That prosecutor has now been suspended.

More on both stories at Ms’s Feminist Daily Wire.

WASHINGTON—After successfully gaining a majority in both the U.S. House and Senate in the 2006 midterm elections, the Democratic Party was mired in controversy when the newly elected speaker of the house, Rep. Pelosi (D-CA), was caught on camera wearing what appeared to be a skirt, ladies top, necklace, and pair of high heels.

The speaker of the house openly addresses colleagues while wearing lipstick and pantyhose.

Photographs and video showing the speaker traipsing around the House floor in the garish attire were leaked to C-SPAN moments after the 110th Congress took office on Jan. 3. Since that time, Pelosi’s unconventional clothing choice has been universally decried by Washington insiders as “a tragic blot on the long and honorable history of U.S. speakers.”

“I was shocked,” said Wall Street Journal political analyst Kendra Graves. “This is not what I’ve come to expect from the House of Representatives—or the White House or Senate for that matter.” Although Rep. Pelosi has made no attempts to downplay the scandal, the embattled speaker continues to draw controversy as more and more Americans have begun to voice their concern over a national legislative body being headed by an individual who enjoys wearing pantyhose in public.

“What kind of a message does this send to our children?” Minneapolis mother of four Carol Hardwick asked. “That it’s ‘okay’ for our top leaders to have long hair and paint their fingernails and speak in a high falsetto voice? This is America, for heaven’s sake.”

While no formal plans have been issued to remove the speaker from office, key members of the Bush administration have publicly expressed disappointment with and disapproval of Pelosi’s behavior.

“It’s disgusting,” said Secretary of State Condoleezza Rice, who was wearing a three-piece suit and flats at the time.

From the Onion. But notably not so different from the “OMG: a Presidential candidate/Home Secretary with breasts!” coverage. Thanks, lp!