In a follow-up to our previous post on Texas’s new acceptance of vibrators, check out this astounding photo and caption regarding the story, from the Washington Post (H/T Feministing). 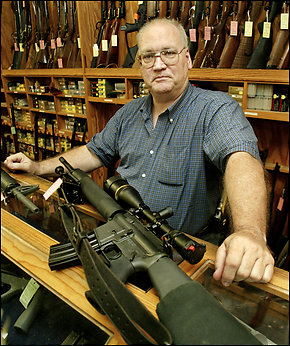 Should buying sex toys be as easy as buying guns?

My questions range from the nerdily linguistic to the cultural (I’m sure you can tell which is which):

(1) I’m sure this is my new favourite example of *something*.  It feels a lot like presupposition, given the way that a bare ‘yes’ and ‘no’ both seem like the wrong answer. This is just like the classic example, “Have you stopped robbing banks?”  (OK, that’s not precisely the classic example…)  But note the way that it differs. One can perfectly well answer it by saying either “No, because it should be much easier to buy sex toys than guns;” or “Yes; and in fact it should be even easier to buy sex toys than guns.” But while “Have you stopped robbing banks?” can be answered with “No, because I never started”, it can’t be answered with “Yes; in fact I never started.”  Is this difference a significant one? Another thought I’ve had is that *it should be easy to have guns* might be merely an implicature of the question.  (Implicatures carried by questions is an under-explored topic, but David Braun has a nice recent paper about it.) This would explain the feeling I have that *it should be easy to buy guns* is more weakly suggested than *I have robbed banks*.  I’m very rusty on presupposition, so thoughts from those more up on it are much appreciated!

(2) As readers may know, I’m a US expat living in the UK. I’ve gradually learned that newspapers here make jokes– that is, just slip them into regular stories. This is something that didn’t happen in US newspapers last time I checked. Has it started happening now? Or is the question being asked in earnest? I’d be grateful for guidance from My Fellow Americans. If it is being asked in earnest, ‘culture shock’ doesn’t begin to capture what I’m feeling.