(Belated thanks to Kathy Ward.)

From The Globe and Mail.

We start with a post about a clearly very remarkable young woman; the puzzle comes after the story:

Alia Sabur is on record as the world’s youngest professor in the history of academia. In February, just a few days shy of her 19th birthday, Alia was appointed full professor at Konkuk University in South Korea. Colin Maclaurin, a physics student of Sir Isaac Newton, held the previous record some 300 years ago.

…She began reading at the age of eight months, entered college at 10 and graduated with a bachelor of science in applied mathematics from Stony Brook University at 14 – the youngest female in American history to earn a university degree. She then went on to complete a master’s degree and doctorate in materials sciences and engineering at Drexel University, while being on record as the youngest person to have received fellowships from NASA, the National Science Foundation and the U.S. Department of Defence.

She is also a brilliant musician, having attended the renowned Julliard School’s music division … She’s no pushover either, as she’s earned a black belt in tae kwon do.

… Before leaving for Konkuk this month, Alia accepted a temporary position at Southern University at New Orleans, a school that had been devastated by Hurricane Katrina. The university is still operating out of trailers. Alia teaches four courses, lives on campus, and maintains her research at Konkuk online. Her students, most of whom are older than she is, appreciate her passion for teaching.

Her achievements shatter the Western stereotype of Muslim women as inherently dim-witted and oppressed. Of course, the opportunities afforded by American society have played a vital role. One doubts that a young Muslim woman (or man) could proceed along a similar path in most Muslim countries. Yet, news reports from Saudi Arabia to Pakistan are trumpeting Alia Sabur’s unique accomplishments.

In fact, many Muslim scientists and engineers I know ask me, “What is this Western problem with women in science?” And in many Muslim countries women are a strong presence in science classrooms, as students and teachers.  See, for example, Athena Unbound: The Advancement of Women in Science and Technology on Turkey.  This book advances an interesting explanation:  Science is not as highly regarded in the society.

Obama monkey dolls are being marketed.

Yeah, Gloria. Blatant racism would *never* be displayed the way blatant sexism has been in this election campaign. We’re SO past all that. (Damn, back to the marking now.)

Update: In case you’re wondering, the folks making the Obama doll say their intent is not to offend:

Our objective is three fold:

1} Provide a cuddly toy for the millions of Obama fans to take a little piece of their favorite candidate home with them.
2} Have a means for children to become a part of the political process with a cuddly plush toy all their own.
3| Contribute a pivotal article of presidential election memoribilia. 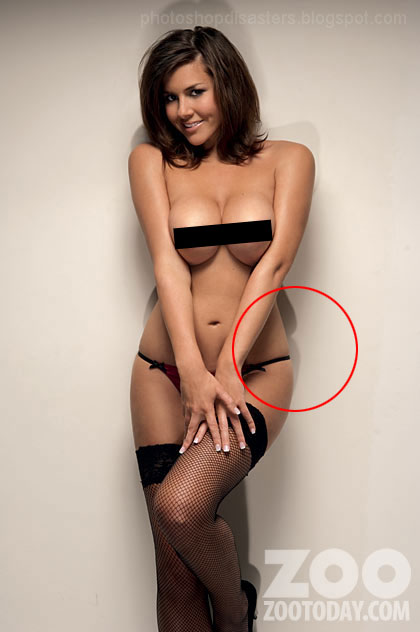 As feminists have said for some time, it’s really tough to get breasts that big while keeping everything else skinny.

Thanks, Mr Jender, for sending me this one from the Photoshop Disasters Blog.