There is a Telecoms Bill being debated in the European Parliament right now, its second hearing is on Wednesday 6th May. In its present form, it allows providers to limit the content, services, and applications that users can access. The Bill originally contained clauses to safeguard our access to the internet, but these have now been removed. The wiki campaign page has a lot more information.

It’s been showing up in the news for a couple of weeks, but the story keeps growing as the number of donations increases.  Now the Chronicle of Higher Ed is joining in on the remarkable story of the anonymous donations being made to US college and universities.  The donations are for various sums, from two to ten million dollars, and at least 14 have been made  so far.

And here’s  the one thing all the recipients have in common:  they are headed by women! 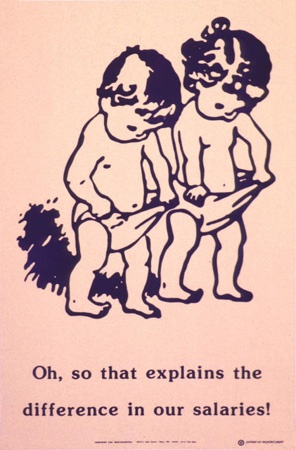 The United States and Australia are the only two countries in the industrialised world that don’t have paid statutory maternity leave (there are exceptions in some US states). At least in Australia, though, your job is protected for a year; in America, even the leave protection only lasts for 12 weeks. It’s an astonishingly backward state of affairs, like discovering that France doesn’t have a postal service.

There’s apparently a new trend in America for companies–eager to ease the strain caused by a lack of paid maternity or paternity leave, limited maternity leave job protection, non-existent on-site childcare, and family-unfriendly working hours and absence policies–to allow employees to bring their babies to work. One can’t help but suspect that some crafty (childless) American businessperson heard about similar schemes, where many companies are allowing employees to bring their pets to work, and thought ‘hey great idea! This’ll solve our parental leave problems! It’s not like looking after a baby involves DOING ANYTHING. So why not let parents bring the babies here and get back to work?!’ A web site dedicated to the trend lists the following benefits of such a scheme:

Right. Because nothing helps you bond with your baby like ignoring her while you work. Or maybe: nothing lowers parental stress like pissing off the coworkers. The always-genius Zoe Williams decided to test out the idea, and–along with two of her fellow Guardian columnists who also have babies–brought her six-month-old in for a day in the office. The results are hilarious in their perfect predictability. A totally genius way to shame women out of the workplace, if you ask me.