Much more information is available here.  It looks like there will be exciting thoughts and great good fun.  You’ll want to book a room soon.

At least three contributors to this blog will be there, by the way.

Another one from the fascinating world of French gendered products. It’s pink! But it says ‘Daddy’! Maybe the product provides a clue… Sugar! Wait…. 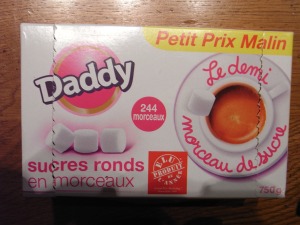 Questions: What can we do to combat this? What can feminist philosophers on the job market do to be taken seriously? And what can those of us who have permanent jobs do to convince our colleagues that it makes sense to take what they will see as a risk and hire someone who works in feminist philosophy?