It’s after 1 pm Central Time and the Queen’s Christmas Speech is already up on youtube.  I assume our British friends and colleagues are now stuffed, with Christmas pud and the wisdom of the royalty.  Fortunately, the Guardian has an alternative Queen’s Speech, but unfortunately it is not yet in a form WordPress accepts.   Still it is given by Bette Bourne and I  found an interview with BB.  I hope you enjoy it, but don’t miss the one the Guardian has.

Bette Bourne is a leading UK performer and a lengendary drag Queen.

Wabi Sabi  is the title of a book, the name of a fictional cat and, most importantly, the name of a concept widely said to be fundamental in Japanese culture.  It is related to Zen, and is often

explained in terms of the idea of appreciating the beauty in imperfect things.  Wabi Sabi, in the last sense, may be found in the preservation of chipped plates, for example.

I first found the term in a review of the book, and then became more interested in it, since perfectionist demands, which many of us carry within ourselves, are such a burden.

Today I started to wonder if it might also be a way to view some of what Obama has accomplished.  There are grave problems with the health care proposal and with the Copenhagen meeting’s supposed accord.  But, though they are imperfect, Obama has gotten the US more engaged and further engaged  in both endeavors than anyone else  has so far (at least as I understand it).

Let us know what you think.   And do enjoy the pictures, all of which are from the book. 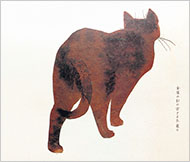