Imagine this:  You are about to give a paper at a fairly demanding conference. A lot of people in the audience are senior and highly respected researchers. You start out by telling everyone how very glad you are to be in the midst of such great thinkers, that you expect to learn so much at the conference, and that the very idea that they will think for a short time about your work is very exciting to you.

Here’s the surprise: It might work. The one time I have seen this in action, it very much did work. It was one of those conferences where the moderators call almost exclusively on men, but there was a very noticeable exception. That’s right, the person thrilled to be there.

That isn’t actually all that surprising to some recent researchers. Obviously manipulative flattery can work very well. And here’s the surprising thing: it works even when the audience consciously identifies it as such and resolves not to be influenced.

In addition to describing the new store’s offerings, the ad lauded readers for their impeccable sense of style and eye for high fashion. While participants overwhelmingly categorized the pamphlet as flattery with the ulterior motive of pushing blouses, the experimenters were more interested in how their attitudes would be influenced at the implicit level. Might participants develop a non-conscious positive association with the department store, even after rejecting the ad as meaningless puffery? And if so, would this implicit reaction be a better predictor of decisions and behavior down the road? Will even the people who are wise to advertising tricks end up at the register, credit card in hand?

It turns out that implicit attitudes towards the store were more positive than explicit attitudes. They were also better predictors of reported likelihood of making future purchases, as well as likelihood of joining the store’s club. So it seems that while participants quickly dismissed these ads at the explicit level, the flattery was exerting an important effect outside their awareness.</blockquote>

I’m afraid it’s evolution and the brain at work.  We act, and often have to act, before conscious deliberation can do much.  Our brain gets us aligned with what’s going on in the environment in ways that are pre-conscious and not necessary sensitive to conscious rational thought, which is certainly liable to mess things  things up anyway.  (As Hume saw centuries ago.)  Unfortunately, the pre- or un-conscious systems may not be all that good at separating the real from the fake.

In the current case, our susceptibility to the fake messages varies with how much we need to be cheered up about ourselves, the researchers claim.  If you’re feeling good about yourself, the flattery will have less  effect.  But here again this is all quite independent of what you’re consciously thinking about it all.

There’s a clear lesson here for students and junior faculty.  If you’re worried about how you’ll be  judged, you know what to do!  Who cares if it is obvious.

Mind you,  the effect you have might depend on how well your target approximates a normal human being.  You need to be extra careful in academia.

Two things that particularly struck me. One is (related to the pic on the right), I quote:

The idea was that the male physician could put his fingers wherever he wanted, but common decency in post-Empire France (or mid 19th-century America, for that matter) prevented him from actually looking.

Now that is curious. I have been musing on a post on sexual harassment in the middle east and one thing that struck me from the report of that conference is that

In Yemen, where nearly all women are covered from head to toe, activist Amal Basha said 90 percent of women in a published study reported harassment, specifically pinching. 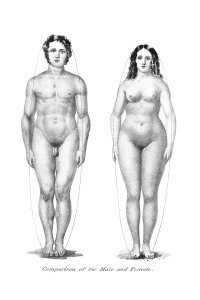 So that is an interesting similarity I thought: maybe seeing the woman is considered haram (not allowed), but touching can be excused, somehow?
I wonder how that works. Apparently that worked (for professionals at least) in 19th century France.

The other thing I noted was the lovely, more than “plus sized model”  woman in the comparison of men and women (on the left).

In an age where women are photoshopped to ridiculous proportions, it was quite refreshing to see a woman with common fat distribution.

I do realise that skinny women are biased against. However, the number of women with quite normal proportions that are biased against for being “fat”, like the woman in this ancient picture would be considered outrageously fat, reached some sort of sad apex.

That is, I hope it is an apex: it can only get better, right?

Anyway, have a look at that site, it’s delightful.