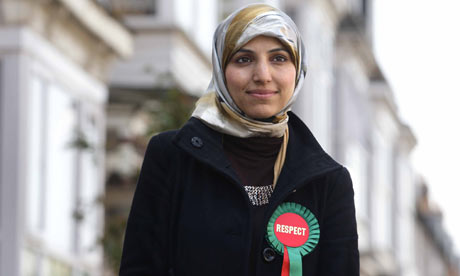 Salma Yaqoob is the candidate of a very small, leftist party. Yet she’s considered quite likely to win her constituency, once considered very safe for Labour. And she’s already a major media figure (who was apparently courted by all three major political parties.) She’s anti-war and pro gay rights. And if she wins, she’ll be the first Muslim woman MP in Britain (though there may be others coming in with her)!

She’s faced some enormous hostility, but is doing a stunning job of winning people over, on all sides.

“I’ve had death threats and criticism that I support gays – because I have a clear anti-discrimination position – and there have been claims that it is haram [forbidden in Islam] to vote for women. People say to me, ‘Have you no shame?’ and they accuse me of immodesty and ask my husband why he lets me speak in public. It’s still an uphill struggle.”

But she has been winning even her fiercest critics round. “Some people who made out fatwas against voting for a woman have now been saying that I’m the right candidate. I have been invited into mosques – some of which don’t even have facilities for women to pray – to give the Friday sermons.”…

She recognises that many non-Muslim voters can feel threatened by her as a Muslim. “I’m between a rock and a hard place,” she says. “I have to jump hurdles because of the way I look. Firstly, I have to make it clear that I don’t support terrorism, secondly, that I’m British, thirdly, that I don’t just lobby for Muslims and lastly, that I’m not a Trojan horse for sinister Islamist plots.

“People still question me about the hijab as a symbol of oppression. I try to stay patient and build a relationship of trust. For a real discussion, people have to be able to hear each other: someone has to pull the barriers down. People have a genuine fear, and you need to deal with it or you are dehumanising them – it won’t just go away.”