Louise Bourgeois, the French-born American artist who gained fame only

late in a long career, when her psychologically charged abstract sculptures, drawings and prints had a galvanizing effect on younger artists, particularly women … Ms. Bourgeois’s sculptures in wood, steel, stone and cast rubber, often organic in form and sexually explicit, emotionally aggressive yet witty, covered many stylistic bases. But from first to last they shared a set of repeated themes, centered on the human body and its need for nurture and protection in a frightening world. 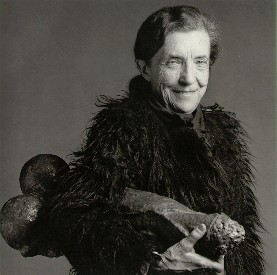 Among her most familiar sculptures was the much exhibited “Nature Study” (1984), a headless sphinx with powerful claws and multiple breasts. Perhaps the most provocative was “Fillette” (1968), a large detached latex phallus. Ms. Bourgeois can be seen carrying this object, nonchalantly tucked under one arm, in a portrait by the photographer Robert Mapplethorpe taken for the catalog of her 1982 retrospective at the Museum of Modern Art. (In the catalog, the Mapplethorpe picture is cropped to show only the artist’s smiling face.)

The Times has a short slide show of her work here.

It was not until the Museum of Modern Art gave Bourgeois a retrospective in 1982, when she was already 70, that she at last took her place as queen of New York, one of the most inventive and disturbing sculptors of the century, and later of course the first artist to to tackle a commission for a temporary work to command the vast spaces of the new Tate Modern’s turbine hall.

One thought on “RIP Louise Bourgeois, artist and sculptor”