I should have posted this CFP sooner, as it intrigues me and provides space for splendid feminist perspective.  Seeing the announcement on PEA Soup reminds me that I’ve neglected it:

CALL FOR PAPERS AND CONFERENCE ANNOUNCEMENT

This conference’s title is ambiguous on purpose. The relationship between
love and reasons for action is highly interesting and complicated. It is
not clear how love is related to reasons. Love might be a response to
certain normative reasons, since it seems fitting to love certain objects.
However, love also seems to create reasons and not to be a response to
certain appropriate reasons. Love’s relationship to morality is also
complex. It is not clear how the normative reasons for acting morally are
related to the reasons of love. It is sometimes argued that love is not a
virtue because the reasons for acting morally are not the same as the
reasons for acting lovingly. But the notion of ‘unprincipled virtue’ seems
to make room for love as a motive of morally praiseworthy actions.

This conference seeks to provide an opportunity to discuss these issues.
Related questions are the following: Do ‘the reasons of love’ constitute a
genuine, distinctive category of reasons?  Are different kinds of love
related to different kinds of reasons? What are the requirements of love,
as opposed to the requirements of duty? Are love’s reasons rational or non-
rational? Can love require to act immorally? If so, are love’s
requirements more or less important than those of morality? Is an action
out of love more praiseworthy than an action done out of a sense of duty?
Are there normative reasons for acting lovingly and to what extent do they
justify partiality? How are we to understand ‘acting lovingly’?

We invite abstract submissions on any issue related to the main topic as
stated above.  Graduate students are encouraged to participate.

The deadline for submission is December 1, 2010. Notification of
acceptance will be sent by January 20, 2011. Abstracts of 1500-2000 words
should be sent to Esther.Kroeker@hiw.kuleuven.be  and
Katrien.Schaubroeck@hiw.kuleuven.be.

At the conference 40 minute slots will be available for presentation,
followed by 20 minutes of discussion.

A selection of papers will be submitted to Philosophical Explorations for
publication.

If you are organizing a conference on logic, truth or inference, and lamenting that there are just no women in the world you could invite, check out this rich resource.  Great list, admittedly incomplete, but a service to the profession!

Alas, a CFP on the same website includes an entirely male speakers’ list.  I have sent them an inquiring email asking if they tried /considered inviting one of these women.

Thank you for your message. We have indeed made deliberate efforts to include female speakers in the line-up of this conference, which, however, for various reasons were not successful.

We have also been working on compensating for the all-male speakers line-up in other ways. For example, we have been actively encouraging female researchers to submit a paper or apply to act as a commentators. We are acutely aware of the issues you raise and do regret the present situation.

On behalf of the the organisers

Women in logic who are reading this blog, hope you’re encouraged!  Let’s all keep on trying.

As a humourless feminist, it is hard for me to tell.

Here’s what happened:  I got an email from the STS group in the Institute for Science, Innovation and Society (InSIS) at Oxford University.  They have had their first walking seminar, which involved walking around Port Meadow for two hours discussing a serious topic.  The topic was “what is it to compare two things”.  And the post had the following terrific picture, which illustrates comparing a graduate student and a cow! 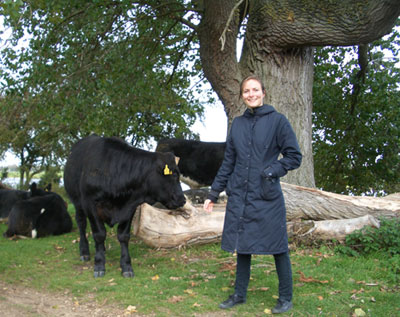 Interesting article from the Guardian about a group of men who have set up a website “grounded in feminist principles” to press the case that there is something wrong with pornography, something about which men should be concerned. The article mentions or discusses a wide range of arguments against pornography — that it degrades women, that it leads to sexual violence, that it shapes how men think about women, that the industry is abusive, and so on. As a self-contained summary of the issues and arguments, it’s very neatly done. Some of the discussion below the line is also worth wading through (some of it, naturally, is bilge).

On the subject of teaching about pornography, and going back to the Guardian article, I found two things particularly interesting. First, there was this quotation from Michael Kimmel:

Second, there was this passage concerning the pseudonymous subject of an interview by Gail Dines for her book “Pornland“:

I recently covered pornography in a second-year class on feminist philosophy. The class has a healthy proportion of men. The Kimmel quotation sums up the attitude of not just the men, but the entire class, to the issue, and hence to most of the arguments we discussed. Both men and women were unimpressed with Mckinnon-style arguments (“silly”), empirical arguments about links to sexual violence (“exaggerated”), and arguments about the industry (“circumstantial”).

In july, we reported on the Guardian’s very ridiculous coverage of a very ridiculous meta-analysis of international data on homebirths that purported to show that homebirths are safer for the labouring woman, but more dangerous for baby.

Reader Wahine has just sent us links to a Lancet editorial about the findings, and its attendant angry letters. The editorial states that

Although home birth seems to be safe for low-risk mothers and, when compared with hospital delivery, is associated with a shorter recovery time and fewer lacerations, post-partum haemorrhages, retained placentae and infections, the evidence is contradictory for outcomes of newborn babies delivered at home.

The author goes on to claim that this is due to methodological problems, and continues,

This is followed by a list of various countries and their various contradictory policy statements. The author then goes on to cite the meta-analysis mentioned above, and conclude that, well, now we know it’s really unsafe for babies, everyone ought to fall in line and recommend hospital birth.

So, alright, I’ve ranted about this already. Let me start a new rant. The author of the editorial concludes, no big surprise, that

And in letters there’s huge anger over this.

Reducing rights to mere interests that can be weighed changes the mother from the owner of to a mere factor in the perinatal decision process. This is directly deleterious to her right to self-determination. The weighing of interests, risks, and outcomes is part of a capable exercise of human autonomy, not the other way around.

Quite right. But here’s my further worry: the meta-analysis purports to show that standard practice (hospital birth) is less safe for the patient (the pregnant woman) than a viable alternative (home birth). This shows a problem with existing medical practice. And yet, seemingly across the board, the discussion has been (only) about whether and which way the patient herself might be at fault; what the patient ought to do; what rights the patient ought to have (NB. the rights discussion never seems to stray into the question of what the woman’s rights are wrt decent medical care; we only ever discuss her rights wrt maiming babies).

I don’t get it. Why aren’t we talking about what’s wrong with obstetrics? What the hell is going on here?

In related news, a midwife in Hungary has been arrested for assisting in home births. Read more here.

It’s pretty pathetic when this counts as good news, but it certainly is an improvement.

More than 200 cameras targeted at Muslim suburbs of Birmingham as part of a secret counter-terrorism initiative are to be dismantled, it emerged today