The awesome Hollaback has i-phone app and droid apps! 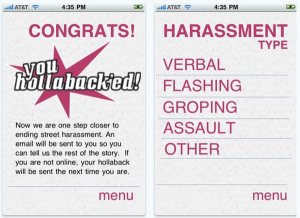 Hollaback! is a movement dedicated to ending street harassment using mobile technology. Street harassment is one of the most pervasive forms of gender-based violence and one of the least legislated against. Comments from “You’d look good on me” to groping, flashing and assault are a daily, global reality for women and LGBTQ individuals. But it is rarely reported, and it’s culturally accepted as ‘the price you pay’ for being a woman or for being gay. At Hollaback!, we don’t buy it.
We believe that everyone has a right to feel safe and confident without being objectified. Sexual harassment is a gateway crime that creates a cultural environment that makes gender-based violence OK. There exists a clear legal framework to reproach sexual harassment and abuse in the home and at work, but when it comes to the streets—all bets are off. This gap isn’t because street harassment hurts any less, it’s because there hasn’t been a solution. Until now. The explosion of mobile technology has given us an unprecedented opportunity to end street harassment—and with it, the opportunity to take on one of the final new frontiers for women’s rights around the word.
By collecting women and LGBTQ folks’ stories and pictures in a safe and share-able way with our very own mobile phone applications, Hollaback! is creating a crowd-sourced initiative to end street harassment. Hollaback! breaks the silence that has perpetuated sexual violence internationally, asserts that any and all gender-based violence is unacceptable, and creates a world where we have an option—and, more importantly—a response.

Via Boing Boing Thanks, Mr Jender!

Wikipedia is overwhelmingly written by men. And Wikipedia knows this is a problem.

Sue Gardner, the executive director of the [Wikimedia] foundation, has set a goal to raise the share of female contributors to 25 percent by 2015, but she is running up against the traditions of the computer world and an obsessive fact-loving realm that is dominated by men and, some say, uncomfortable for women.

Her effort is not diversity for diversity’s sake, she says. “This is about wanting to ensure that the encyclopedia is as good as it could be,” Ms. Gardner said in an interview on Thursday. “The difference between Wikipedia and other editorially created products is that Wikipedians are not professionals, they are only asked to bring what they know.”

“Everyone brings their crumb of information to the table,” she said. “If they are not at the table, we don’t benefit from their crumb.”

Wonderful to see the problem laid out so clearly. (Great example for teaching social epistemology as well!) And now, we should all go become part of the solution. (Yes, even if you’re not a woman, you’re the sort of person who reads this blog, so I’m betting your perspective is also under-represented.)

UPDATE: Here are instructions on contributing. It’s really very easy– go do it!