Jessie Hemmons got sick of the Rocky Statue in Philadelphia, so she took action: 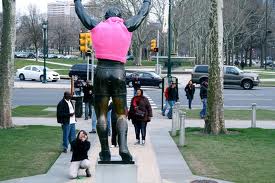 From the NY Times:

Yarn bombing takes that most matronly craft (knitting) and that most maternal of gestures (wrapping something cold in a warm blanket) and transfers it to the concrete and steel wilds of the urban streetscape. Hydrants, lampposts, mailboxes, bicycles, cars — even objects as big as buses and bridges — have all been bombed in recent years, ever so softly and usually at night.

It is a global phenomenon, with yarn bombers taking their brightly colored fuzzy work to Europe, Asia and beyond. In Paris, a yarn culprit has filled sidewalk cracks with colorful knots of yarn. In Denver, a group called Ladies Fancywork Society has crocheted tree trunks, park benches and public telephones. Seattle has the YarnCore collective (“Hardcore Chicks With Sharp Sticks”) and Stockholm has the knit crew Masquerade. In London, Knit the City has “yarnstormed” fountains and fences. And in Melbourne, Australia, a woman known as Bali conjures up cozies for bike racks and bus stops.

Here’s a google page of pictures of mostly yarn bombing.

We quoted the New APPS blog’s discussion of shunning as saying, among other things, the following:

The Feminist Philosophers blog recently suggested not inviting serial harassers to conferences. One could easily extend this to not inviting them to publish, not conversing with them at conferences, advising students to avoid their graduate program, etc. We can hope that such informal shunning would have a significant effect. Of course, without a naming and shaming mechanism this approach will be limited to folk somehow in the know.

What I’m wondering about is what falls under the “etc” at the end of the second sentence. And that’s because I’m finishing some work that contains a discussion of two views clearly linked to X, where X is a major figure in a sub-area of the field I’m discussing, and a sexual harasser of, in my opinion, a particulary scummy sort.

In fact, someone who supported the shunning idea recommended that I discuss two views the harasser has.

Because I don’t have views connected in my mind to harassment, I’ve only just realized what my citing him means. Now in fact other people have discussed his views with approval, and I can quote them rather than him. So I’m not so concerned about my own work here as I am concerned about somewhat more general princples and questions.

The first set: Should shunning be extended to discussing in journals? I.e., don’t discuss them even if it is a bit strange to avoid mentioning them. How about when we have a world-class figure who started off a field, and the discussion in the literature so far is largely about their view.

The second set: What effect do we think such shunning will have? Clearly, it could be a major thing if the literature omits any discussion of him. But will anything like that happen? And if it doesn’t, how will we feel. Lots of people know about X’s behavior, and I haven’t seen it affect anyone’s professional treatment of him. Will that somehow start to change? And if it doesn’t, won’t one’s own sense of alienation from the field simply increase?

And actually I am now wondering about the shunning. Will women find that shunning’s main effect is to make them feel more like outsiders as the profession itself flocks around the abusers. Of course, shunning has to start somewhere, but if it is principally women who do it, then the effects may overall not be good.

These are just initial questions; I’ve only started to think about it. But I am wondering if in effect the shunning will be effective only when done consistently by the professionally stronger members of our profession, at least at the beginning.

***DEADLINE FOR ABSTRACT SUBMISSIONS NOW EXTENDED UNTIL MAY 30TH***

In brief, Researching Feminist Futures will provide a space for creative discussions of feminism in academic practice. It is a two-day symposium aimed at graduate and early years researchers working with feminism and/or gender. Its goal is to develop new
networks, new knowledge and strengthen ways of working. In this way, we hope to celebrate our own efforts in feminist research whilst constructively re-imagining what feminist research can be.

The conference is scheduled for the 2nd and 3rd September and will be held in the Graduate School of Social and Political Science at the University of Edinburgh.

We can be reached at researchingfeministfutures AT googlemail.com with submissions and for further details.