Sophia Isako Wong offers answers, or at least possible suggestions, here.  Worth reading, and worth sending prospective graduate students to, if only to discuss.

I have heard many rumblings from many sources, both US and UK, about a recent (last few years) drop in women applying to do PhDs in philosophy. This blog post is attempting to collect data on the phenomenon.

This picture is making its way around the ‘net. Just about any message that points out the great injustice of our health care system gets positive points from me. But I’m a bit worried about the accuracy of his message. For why, see below: 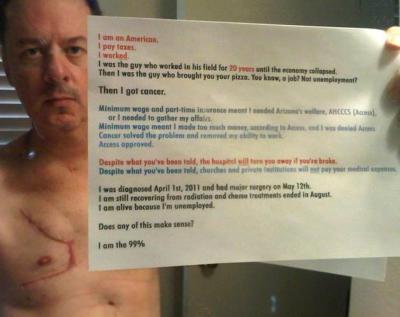 So what worries could one have?  Actually, the flaws in the picture seem so obvious, that I’m having trouble believing they are real.  I mean, it would be pretty easy to get someone who actually looked like they had chemo, or at least the guy could have shaved and they could have hidden his hair under a cap.

Here are some worries, then, given that his rads and chemo ended in August and his surgery was in May, and judging from my own case.  All I’m supposing is that the picture was taken after the rads and chemo.

1.  If that scar is from a May operation then it looks way too red.   Four months after surgery about half my scar is now back to my normal skin color.

2.  Chemo really does a job on hair, including eyebrows and beard.  How long it takes to grow back varies, but it takes a long time just to get fuzz.

3.  That does not look like a recently radiated nipple to me.  Radiation changes the color of that  tissue and it takes some time to recover.  Plus, it is surprising the nipple was left; that’s not too unusual, but that “incision” is pretty big and would indicate the cancer wassignificant.  It’s often safer to take the nipple.

4.  Cancer does not automatically make one unemployed, contrary to what he seems to suggest.  It certainly can, but it is far from automatic.

One lesson here:  if you think someone at work is wearing a wig, don’t assume it is from superficial vanity.  They may be one of the employed cancer patients.

Further, the person at work may be hiding the cancer.  It is unbelievable how badly some people treat cancer patients.  Many, many people have very bad experiences.