This picture (cropped from here) doesn’t prove anything, but it exemplifies a thesis I’ve had rattling around in my skull for a while.   There are certain ideas out there, such as, “There is this thing called systematic racism exists and if you don’t have to deal with it on a daily basis, that’s a privilege you have no real right to brag about.”  Now, a lot of people can be really obtuse about these this kind of idea if it’s presented as an argument.  However, I’ve seen a bunch of situations where someone comes up with the right joke and suddenly a switch flips–people get it.  (i.e. They understand what you’re trying to say…and they seem to agree with most of your premises.)

tl;dr When I look at the kind of humor people are able to pick up on, I suspect that more people understand basic issues of kyriarchy than I realize. 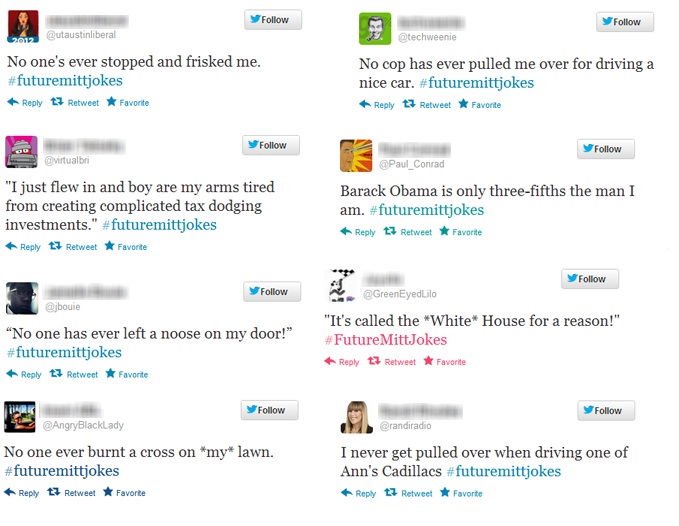 (Go here if you want to browse more of these jokes on twitter.)

More rambling after the jump.

With the picture above, there are some specific things going on that preclude this from being evidence of my claim.  (1) The hashtag could be self-selecting; maybe all the people who already get systematic racism are the ones who find the hashtag funny and thus join in.  (2) There could be something about Mitt and his nexus of racial and class privilege that make people get his privileged status, but that doesn’t mean they’ll extrapolate to other, more ‘average’ white and middle class people.

But still, the degree to which this hastag seems popular is surprising.  Also, this kind of thing has happened to me a few times; I’ve seen people argue against the existence of systematic oppression but then they turn around and laugh at a joke where, if you didn’t think some of this specific sort of inequality existed, the joke really wouldn’t seem funny.  My suspicion is that when we engage in ‘argument’ mode, we sometimes have these well worn ruts that we automatically jump into.  But humor can disrupt or twist our normal patterns of rhetoric and our normal sense of what ‘our position’ is, so perhaps it’s the argumentative equivalent of slipping past the front lines.

Other examples I’ve run across: unexpected white people getting Key & Peele’s jokes about race and class, people (whom I don’t expect to) laugh at male/white/het privilege via Margaret Cho and Wanda Sykes.  Heck, I recently ran across an old Eddie Izzard clip on how ‘If someone is weird and transvestite, they are weird *for* a transvestite.’*  As I listened to the audience laugh, I wondered, how many people would be agreeing with this train of thought if instead we were sitting around a table discussing a news article about the same circumstances?**

*Normally I wouldn’t use the word “transvestite”, but since (a) he is self-identifying and (b) I can’t tell from context what a better word would be (he said it’s not “cross-dressing” but he doesn’t seem to mean “transgendered” either), I’m quoting his term. If I’m being obtuse about this, corrections are welcomed.

**It’s worth noting, there are some problematic aspects of Izzard’s joke. For instance, the role than mental health plays in whether or not people seem “weird” is left unacknowledged.  Also, the categorizing of people as “weird” and thus worthy of shame/ridicule is buckets of problematic.

One thought on “Can Humor Make Us Better Thinkers?”