Honda releases (just in Japan for now) a car made for women. Unlike all those other cars which I guess they make for men.

From “Wheels”: “Honda has revealed a new pink Honda Fit with a special “She’s” model trim designed to target the female demographic.” It lets in fewer skin damaging UV rays and has a air conditioning designed to keep skin soft.

Read more here. Excuse me while I go barf. 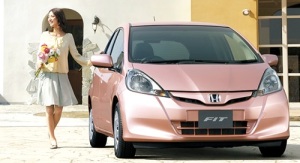 I feel so bad when someone says we are always bashing Republicans, so I want to feature Romney on the morning after the disaster:

I feel so bad when someone says we are always bashing Republicans, so I want to feature Romney on the morning after the disaster:

The author of the letter below had been addressed as ‘Miss’ several times by a reputable journal.

Since I earned my PhD from a reputable university in 2000, and have
held the rank of Assistant Professor since 2002, I believe I have
earned the right to be addressed in professional contexts as ‘Dr.’ or
‘Professor’ X. (I prefer the former, but I gather the latter is also
standard in the USA.)

I don’t believe my marital status is relevant in any professional
context: should you not wish to address me by professional title, the
appropriate salutation would be ‘Ms.’ or (more conventionally given my
gender) ‘Mr.’

In the CHE article on women in philosophy, a commentator asked a great question about philosophy’s ethical compass.

It was odd, then, to read about possibly relevant research today:

ScienceDaily (Oct. 30, 2012) — New research shows a simple reason why even the most intelligent, complex brains can be taken by a swindler’s story — one that upon a second look offers clues it was false.

When the brain fires up the network of neurons that allows us to empathize, it suppresses the network used for analysis, a pivotal study led by a Case Western Reserve University researcher shows.
How could a CEO be so blind to the public relations fiasco his cost-cutting decision has made?
When the analytic network is engaged, our ability to appreciate the human cost of our action is repressed.
At rest, our brains cycle between the social and analytical networks. But when presented with a task, healthy adults engage the appropriate neural pathway, the researchers found.
The study shows for the first time that we have a built-in neural constraint on our ability to be both empathetic and analytic at the same time
The work suggests that established theories about two competing networks within the brain must be revised. More, it provides insights into the operation of a healthy mind versus those of the mentally ill or developmentally disabled.
“This is the cognitive structure we’ve evolved,” said Anthony Jack, an assistant professor of cognitive science at Case Western Reserve and lead author of the new study. “Empathetic and analytic thinking are, at least to some extent, mutually exclusive in the brain.”
The research is published in the current online issue of NeuroImage…
But, even healthy adults can rely too much on one network, Jack said. A look at newspaper business pages offers some examples.
“You want the CEO of a company to be highly analytical in order to run a company efficiently, otherwise it will go out of business,” he said. “But, you can lose your moral compass if you get stuck in an analytic way of thinking.”
“You’ll never get by without both networks,” Jack continued. “You don’t want to favor one, but cycle efficiently between them, and employ the right network at the right time.”
The researchers continue to test the theory, studying whether brains will shift from the social network to the analytical when students in the MRI see people depicted in a dehumanizing way, that is, as animals or objects. The group is also studying whether disgust and social stereotyping confound our moral compass by recruiting the analytical network and depressing social network activity.”

This seems to me important work. Not only does it offer an explanation for the prevalence of ass***es in our highly analytic field, but it highlights something we could try to address. Exercises in imagining what it is to be a female assistant prof, for example, might help change people.

Or I could work on something more likely to succeed, such as training my cats to do the dishes.

——————
Just so you know: the PI’s mother is a philosopher, Julie Jack, Somerville College, Oxford.

Wow. Good for him for saying this, and in the middle of the election no less.

McGill has their own “Who Needs Feminism” tumblr up and running.
(Found this through Hook and Eye.)

The “Who Needs Feminism” campaign was started by a group of sixteen Duke University students in a Women’s Studies class. The campaign is designed to combat the negative connotations associated with the word “feminism” and to spark a discussion about why we all need it through asking people to define it for themselves.

END_OF_DOCUMENT_TOKEN_TO_BE_REPLACED

It was this short report that made it clear to me how bad the effects of the cyclone have been.

Superstorm Sandy left wreckage in its wake “beyond anything I thought I’d ever see,” New Jersey Gov. Chris Christie said at a news conference today.

“The level of devastation at the Jersey Shore is unthinkable,” he said.

The state is “nowhere near” allowing many residents to return to that area, Christie said.

He plans to fly out today to visit one of the worst-hit areas, but there is nowhere for him to land at the Barrier Islands because of all the damage.

Also, every rail line in the state has faced major damage, he said.

Christie said he’s confident that President Barack Obama and the federal government will work with New Jersey and that the state will rebuild.

Actually, that – be safe – is what Obama said in an email. I’m not totally certain what it means, but we wish the best outcomes for you. Please share how you are, when you can and if you feel like it.

This time-lapse animation shows Hurricane Sandy from the vantage point of geostationary orbit—35800 km (22300 miles) above the Earth. The animation shows Sandy on October 28, 2012, from 7:15 to 6:26 EDT. Light from the changing angles of the sun highlight the structure of the clouds. The images were collected by NOAA’s GOES-14 satellite. The “super rapid scan” images—one every minute from 7:15 am until 6:30 pm EDT—reveal details of the storm’s motion. NASA animation by Kevin Ward, using images from NOAA and the University of Wisconsin-Madison Cooperative Institute for Meteorological Satellite Studies. View more imagery from Hurricane Sandy at earthobservatory.nasa.gov

There’s an article today in the CHE on women in philosophy. Think of going over to comment.

I think it is available without subscription; if it isn’t, I’ll copy it below. Off to check…

I’ve had an email from someone who will soon be editing a postgraduate (or, in American, graduate) journal.  They are hoping to practise triple-anonymous review in order to reduce opportunities for bias, despite being very short-staffed and they’d welcome practical advice on how to do this.  They are also hoping to encourage submissions from members of groups currently under-represented in philosophy, and looking for advice on how to do this.  Any thoughts?