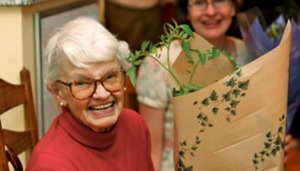 Here’s a good news story. Judith Jarvis Thomson has been awarded the American Philosophical Association’s Quinn Prize for her lifelong contributions to philosophy and philosophers. Read more about this well-deserved honor to a great woman in philosophy here.

Big congratulations to you, Judy Thomson, from the Feminist Philosophers!

There is an important discussion going on at New APPS about anonymous reviewing, The journal reviewing process isn’t anonymous. Did you really think it was? Think again!

Writes Berit Brogaard: “Refereeing is far from always blind. It cannot be completely objective because of how the profession operates and because of technological developments. In most cases it’s too easy to find out who the author of a certain paper is. And people have an urge to find out before they referee your paper. And while your peers will claim to be neutral and unbiased, we know all too well that once people know that the author is an unknown junior at a crappy university, a woman or another minority, implicit biases may influence the verdict.”

Definitely worth reading the comments too.

From What Actually Matters in Job Interviews (United Academics)

Lauren Rivera, assistant professor of management and organizations at the Kellogg School of Management at Northwestern University, explored the hiring process by interviewing and observing employers of elite companies like law or consulting firms. It’s like picking out a partner or friend, she concludes.

Former studies on hiring focused mostly on easily observable data, like school, race and gender. But Rivera instead looked at a broader spectrum of possible influences. She saw that employers don’t always pick the most skilled candidate, but the one that ‘fits’ best on the workfloor.

Just like people pick friends or romantic partners, employers look for similarities in job candidates. Do they have the same hobbies, experiences and presentation style as the other colleagues? This often outweighs the actual expected productivity. So don’t try to convince them that this job will be your hobby.

For philosophers I imagine this kind of matching of interests happens most at on-campus interviews, rather than APA interviews. But maybe I am wrong about this.

I was interviewed, many years ago when I was on the market for the first time, by a lone researcher in my sub-field who’d clearly been given the go ahead to hire a research buddy. I worried that my lack of interest in going out for a beer after the interview made me flunk the “buddy test.” And as a young woman. I did worry that the lone researcher’s wife wouldn’t approve of me in the role of philosopher drinking buddy.

But things are much better now, right?