“In ‘The hidden dangers of cycling’ by A. Shadwell, M.D published in 1897, in the journal National Review, the author advises women against ‘attempting a novel and peculiar experiment with their precious persons.’ That ‘novel and peculiar experiment’ would be riding bikes. He writes that the risks to women’s health include internal inflammation, exhaustion, bicycle face, appendicitis, dysentery, nervous attacks.”

You can find the full story here.

An excellent story, here. Importantly, though, there’s an error: site visits are emphatically NOT just for departments with problems. They’re for anyone, including departments that already have an excellent climate and yet nonetheless want to improve/avoid complacency. Please do correct this if it comes up in your conversations with people.

There’s a nice follow-up from Peter Adamson on the women-shaped gaps in his history of philosophy podcasts.

Go check it out, here. 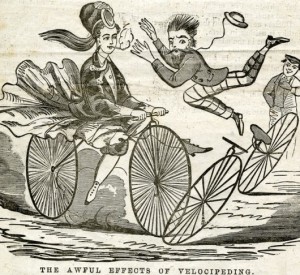 Historically, riding bicycles was thought to corrupt women’s innocence. More perniciously, opponents to women riding bicycles have objected to “free, untrammeled womanhood,” to quote Susan B. Anthony. Has that attitude changed much over the years?  Maybe not. Read more here.

We are enormously sad to report the death of Gill Howie, who has been absolutely vital to SWIP UK, remaining on the executive committee throughout her illness.

I am sad to report that Gill Howie died yesterday (26th March) after spending some time in the Marie Curie Hospice in Woolton. I will pass on any further news about her funeral and memorial.

Gill’s most influential work was in feminist philosophy, especially the intersections between Feminism, Marxism and Critical Theory. She published widely and edited a number of collections in these areas, including the widely read Third Wave Feminism: a Critical Exploration. She was series editor of the Palgrave series ‘Breaking Feminist Waves’, and recently published Between Feminism and Materialism: A Question of Method (2010).

Her philosophical work grew out of her commitment to social and political activism. She served on the national executive committee of the AUT as well as of the British Philosophical Association and the Society for Women in Philosophy. She was a conscientious and approachable Head of Philosophy, who cared deeply for the health and vigour of the Department. She will be very much missed by her colleagues and students, by her two young sons, and all her friends.

More recently and in the light of her own experience of a long struggle with illness she led a number of interdisciplinary research projects aimed at exploring the philosophical significance of life-limiting illness. That she was unable to complete these projects adds to the sense of tragic untimeliness of her death.

Please leave your thoughts and memories of Gill in comments on this post.

The “White Student Union” at Towson University in Maryland has announced they’re going to start doing nighttime “patrols” of campus. Pretty unbelievably (and by unbelievable I only mean that I cannot fathom the amount of cognitive dissonance involved) they claim not to be racist in the least, and yet refer to concern regarding “black predators,” and–at least some members–express an openness to the permissibility of slavery.

Truly disgusting. You can read more about it here.

Yesterday I was watching the Melissa Harris Perry (MHP) Show and legal scholar  Kenji Yoshino talked about a possible paradox at play in regards to the Supreme Court (SCOTUS) ruling on Prop 8 (and the other case that no one seems to reference by name).  He brought up the following point: a group has to have a significant amount of political power in order to even make it to the Supreme Court, who will rule on whether they are being discriminated against.  This can be restated as,

“A group must have an immense amount of political power before it will be deemed politically powerless by the Court.”

I can’t find the exact clip, though here is Sunday’s MHP show.  And since I was forced to search the internet for another mention of Yoshino’s quote, I stumbled across a law review article he wrote on the topic (no pay wall!).

Today I was reminded of this paradox as I logged onto Facebook and was greeted with a newsfeed awash in red and pink:

(more after the jump)

END_OF_DOCUMENT_TOKEN_TO_BE_REPLACED

Via The Leiter Report, The Guardian has a profile of Ted Honderich which includes the following:

Honderich may be in for further trouble with his revised edition of the Oxford Companion to Philosophy. He’s typically downbeat about his part in the original project. “I think I was only asked because I was considered reliable,” he says. “Other philosophers had said they would do it and then failed to deliver on deadline. I imagine they thought it wasn’t proper work for a philosopher.”

This time round, free from the constraints of the academic circus, he’s been free to make 300 additions, including “ableism” – “it basically means being condescending to cripples”.

On Thursday (March 28) evening from around 9:30 onward there will be a gathering of self-identified LGBTQ philosophers at The Cantina Bar.

On Friday (March 29) evening after the SWIP session (shortly after 10:00) there will be a “Feminists and Friends” gathering in the Clock Bar at the St. Francis Hotel (the hotel where the conference is taking place).

If you’re at the Pacific APA and self-identify as LGBTQ, feminist, or feminist-friend, please consider coming along!