Yesterday I was watching the Melissa Harris Perry (MHP) Show and legal scholar  Kenji Yoshino talked about a possible paradox at play in regards to the Supreme Court (SCOTUS) ruling on Prop 8 (and the other case that no one seems to reference by name).  He brought up the following point: a group has to have a significant amount of political power in order to even make it to the Supreme Court, who will rule on whether they are being discriminated against.  This can be restated as,

“A group must have an immense amount of political power before it will be deemed politically powerless by the Court.”

I can’t find the exact clip, though here is Sunday’s MHP show.  And since I was forced to search the internet for another mention of Yoshino’s quote, I stumbled across a law review article he wrote on the topic (no pay wall!).

Today I was reminded of this paradox as I logged onto Facebook and was greeted with a newsfeed awash in red and pink:

(more after the jump)

I had some conflicting thoughts once I realized that people were changing their profile picture in support of a drive by the Human Right Campaign.  On the one hand, I was touched by the overwhelming visual effect that there are a whole ton of people who support the right for same-sex couples to marry.  I wanted to contribute to that effect.  And yet, I also felt somewhat…frustrated (anxious?) since I know that there are DOZENS of campaigns for equality and against discrimination that deserve just as much attention as this issue, and are not receiving it.  (In fact, the MHP show I linked to talks about some of them, such as: workplace discrimination, housing discrimination, and discrimination against transgender servicemen and women.)

For instance, while it is important that same-sex couples have the same right to marry and receive the benefits of marriage, people who want to form less traditional family structures have found their lives made harder because so much of our social safety net (e.g. survivor benefits) are tied to the institution of marriage.  For those people (het or queer) who don’t want to participate in this institution, they sacrifice tangible legal and social benefits to do so.  As I once heard it pointed out, it seems overly restrictive that we simply cannot name our kin for things like survivor benefits, hospital visitation rights, co-habitation, child rearing, and inheritance (in many cases).

But it’s hard to argue that we should radically re-conceive what role marriage plays in our legal system when there is simultaneously an argument gaining momentum to simply let a group of people conform already “established norms” (a Scruton reference).  That isn’t to say that same-sex couples who want to get married as selling out (any more that opposite sex-couples who want to get married are.)  It’s only to point out that I think in the same way there is a paradox of power at play in how SCOTUS comes to rule on discrimination, citizens who want to support causes of social justice face a related paradox.  We want to be practical and pick our battles.  But often, the battles that most badly are in need of allies and support are the ones on the fringes, with the least momentum and are the least likely to succeed.  A cause often needs to have a significant amount of support before it even crosses out radar as being in need of support.

So while the equal sign campaign has many of us thinking about equal rights for LGBTQ communities, here are some other battles that equally deserve our support:

Trans inclusion in the military

The gay and transgender wage gap

UPDATE: In light of the HRC’s abysmal history of supporting trans* rights, I did some old school editing in paint. 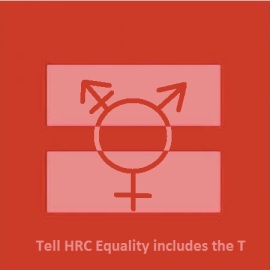 This is in light of the fact that people have expressed pain and frustration at seeing HRC receive so much free, positive publicity when their track record on “human” rights has been deeply marred by their unwillingness to support the T in LGBTQ, especially in regards to the 2007 ENDA legislation.  They seem to be doing a better job since then, but some people have remained skeptical of their commitment to being at the forefront of supporting trans* rights.

If anyone has thoughts about HRC and their work (or lack thereof) on ending discrimination against trans* persons, I would like to hear them.  I only learned about HRC and the ENDA legislation yesterday.

Also, I’m a bit embarrassed to admit this, but I finally looked up the term “trans*” because I’ve seen it gain popularity, but I didn’t know how to use it grammatically (semantically? Help, Phil of Langers!). I had no clue the asterisk has geeky origins!  (The more you know.)

15 thoughts on “Picking Our Battles: The Paradox of Power & Social Justice”