PSWIP (People in Support of Women in Philosophy) wants to extend an invitation to our readers to their upcoming 2014 symposium. The symposium will be held at the New School for Social Research in New York City on May 8th-10th, 2014. 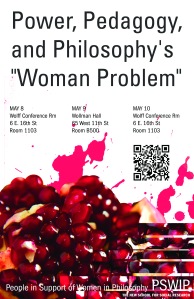 All events are free and open to the public. Thank you, and we look forward to seeing you there. For more information, please contact Amie Zimmer (amie.leigh.zimmer@gmail.com)

The norms that facilitate the behavior of our big shot Ivy-league professor piggy back on methods of doing philosophy that are under scrutiny now, that are reinforced by once popular conceptions of justice that now seem too limited (as the anonymous author nicely exhibits in her piece), that rely on a practice of professional bullying by philosophical enforcers that cannot be justified, and that rely on cultures of silence that are being destroyed by our courageous friends at Feministphilosophers. One of the most heartening facets of the last half decade is that all kinds of lousy institutional practices in professional philosophy are now being publicly reevaluated in blogs, on facebook, in workshops, and in department meetings.

Thinkers as diverse as Hobbes, Spinoza, Hume, and Wollstonecraft recognized that if one wants to promote social and political reform then the character of the philosopher as public figure needs to be beyond reproach, or, at least, consistent with the mores one prescribes to others. Our generation is discovering a version of their shared insight. Professional philosophers need to have their professional house in order. That is in the ways we conduct our profession, we need to accommodate ourselves to the demands of justice in a variety of fashion if we want to speak with ongoing authority on the world’s problems. Our status as something other than intellects for hire requires from us a way to integrate our concern with justice into shared best practices (that is, new norms).

What follows is a long quote from the CHE. On topics like this, comments are typically closed on this blog. Among other things, we are very concerned not to encourage disparaging and reputation destroying comments. In this regard, see Jender’s very important comment here.

A female graduate student who last year accused Colin McGinn, a prominent philosopher, of sexual harassment has filed a complaint with the U.S. Equal Employment Opportunity Commission, saying the University of Miami discriminated against her by mishandling her allegations against him.

The former student, who has left Miami and has not been named publicly, filed the 300-page complaint in March, accusing the university of violating both Title VII of the Civil Rights Act of 1964 and Title IX of the Education Amendments of 1972. The EEOC will consider the complaint and decide whether to issue the former student a right to sue.

Her lawyer gave The Chronicle a summary of the complaint, which says Miami played down her harassment charges, telling her she did not have enough evidence. Instead, the summary says, Miami told Mr. McGinn he had broken a university rule requiring professors to report romantic relationships with students they supervise. The university then pressured Mr. McGinn to resign, the document says, and he did so last December.

The graduate student—who also worked as an assistant to Mr. McGinn—maintains that she never had a consensual relationship with him.

… The student, it continues, felt “hounded, suffocated, and trapped by his constant barrage of communications and need.”

Officials at Miami ignored the student’s complaints and charged Mr. McGinn with violating its relationship policy as a way to get him out the door fast and to avoid further fallout, the summary of the complaint says. In that way, it says, officials “hijacked” the grievance process “to save UM a public scandal, rather than provide a fair accounting of Professor McGinn’s misconduct.”
…
Miami’s lawyer, Eric D. Isicoff, issued a statement last week to The Chronicle, saying the university “takes very seriously all complaints alleging misconduct.” After investigating the student’s allegations against Mr. McGinn, “senior administrators determined that an immediate resolution would be the most prudent approach,” the statement reads. “The entire situation was concluded over a period of only a few months.”

An earlier letter from concerned philosophers expresses another concern about the student’s being treated justly.