Readers may be interested to hear of this exhibition, which is opening next month at the Leslie-Lohman Museum of Gay and Lesbian Art in New York. All of the pieces on display are LGBTQ art works that have been censored in various ways by major museums and/or art galleries. You can read more about the exhibition and see photos of some of the works here.

Here at Feminist Philosophers, we love a good knit, so I was very happy to discover Trixie von Purl’s new book Knit Your Own Kama Sutra.

My favourite is probably this one: 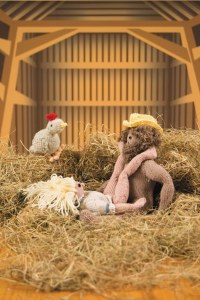 [Image shows two knitted figures – a man and a woman – having sex on hay bales. The man is sitting up with his legs stretched out in front of him. He has curly hair and a beard and is wearing what appears to be a cowboy hat. The woman is lying facing him, resting her head on his feet, with her feet around his neck. A knitted hen looks on, possibly in some amusement.

Many readers will recall that recently, John McAdams, a Marquette political science professor, drummed up a spurious reason to make a politically-motivated public attack on Cheryl Abbate, a graduate student of philosophy (our previous posts here and here; Daily Nous coverage here and here. Marquette is taking action against McAdams; its outcome is thus far unclear).

As a result of his actions, Abbate received hateful, misogynistic abuse, disturbing in both content and quantity, in a number of forms and forums. She has now written a blog post detailing the extent of this abuse, exploring her experiences on the receiving end, reflecting on how one should respond to it, and making it quite clear that McAdams bears responsibility for inciting it.

(For those clicking through, I reproduce Abbate’s trigger warning: “This post includes a number of reprinted misogynist and homophobic comments”. She’s not wrong).

Abbate says that she was mostly advised to ignore the abuse, but chose to expose it and draw attention to it, for a number of reasons. This was a brave decision. Abbate says the most important reason she has for speaking out is that, if we aren’t aware that such horrible abuse takes place, we can’t begin to do anything about it. This seems quite right to me. I’m unlikely to receive any misogynistic email myself, and I find it reprehensibly easy and tempting to bury my head in the sand about such things. I really shouldn’t. If someone writes about their experiences with such courage, to read and think about it is the very least I can do.

Abstracts and details (in French) can be found here.