It’s the Oxford glossy; this one for Trinity Term. In the section “Common Room”, which features book essays and Reviews, all 13 reviews are about books by men. There is an essay about a book by a man and a woman.

In other news, the sun rose this morning.

The post title is also the title the NY Times gives to a piece about Carmen Herrera, one of the six artists who are “A very small sampling of the female artists now in their 70s, 80s and 90s we should have known about decades ago.”  The look at the six women is a wonderful and stunning interactive piece.

Carmen Herrera, 99, a regal Giacometti-thin woman with bone-white hair, could be the poster child for late-in-life recognition. Her work will be included in the Whitney Museum of American Art’s much-anticipated show this month, inaugurating its new building at the foot of the High Line. There, a painting of hers — the diptych “Blanco y Verde,” 1959 — will hang for the first time alongside works by Ellsworth Kelly, Frank Stella, Agnes Martin and Jasper Johns, publicly granting her a status in the canon that — according to curators at several major institutions — should have been hers for years. She will be a centenarian this month. A documentary about her life, “The 100 Years Show,” made its festival premiere in April.

One could weep, but instead let us note that it is time we paid attention to the older women in philosophy who could be considered to be in comparable positions where they are “now in their 70s, 80s and 90s [and] we should have known about decades ago.”

So the first question is: what are the comparable positions?
Maybe next is: what should we do?

H/t to someone on FB. My apologies for not remembering who.
In addition, the incoming U of Texas president refused a million dollar salary and took $750K instead. 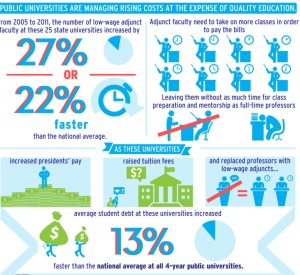 A reminder of Shelley Tremain’s excellent series of interviews with disabled philosophers, which is taking place over at Discrimination and Disadvantage.

The second interview is with Zara Bain, who is based at the University of Reading.

Zara is in the early stages of her second attempt at a PhD in Philosophy, specializing in the intersection of moral and political philosophy and social epistemology. As a self-identified disabled philosopher with long-term chronic illnesses, she engages in the practice of philosophy in the university when she is well enough to do so. When she is not well enough, she can be found resting and talking about disability, talking philosophy, or making philosophy jokes on Twitter. In her spare time, Zara creates vegetable-based, gluten-free, and dairy-free comfort food, learns about animal politics from her two dogs and cat, dances to beats-heavy music, writes about disability in higher education, and devises ways in which she can produce resources for teaching and learning in philosophy in order to earn a living post-PhD.

You can read the interview here.