And whilst we’re talking about benefit sanctions…

If we believe that our society should be one where no one is left to starve or to go without food, warmth, and shelter, then there can be no good reason to cut off someone’s only means of procuring these basic human necessities. But this point aside, some sanction decisions are surreal in their awfulness. Here’s a nifty list collated by i100 of the eleven most senseless sanction decisions.

All of this could be funny in its ridiculousness if it weren’t for the fact that people are, you know, dying as a result of having their benefits stopped.

Benefit sanctions – a morally repugnant and empirically flawed system, where claimants have their benefits stopped by jobcentre staff, who are themselves under pressure to meet sanctions targets.

In just another twist to the surreal awfulness, Welfare Weekly has found out that a leaflet produced by the Department for Work and Pensions about the system, contained fictional profiles supposedly about claimants who’d had a positive experience with sanctions. Yes, that’s right. They included profiles that were entirely made up. One profile was of ‘Sarah’, who was really glad her benefits had been stopped because it helped her to rewrite her CV (because having no money to buy food is really good at focusing the mind): 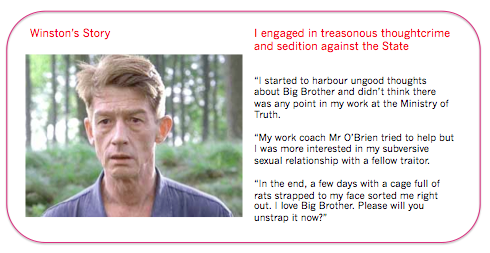 The latest installment in Shelley Tremain’s excellent series of interviews with disabled philosophers is out today. This time, she interviews Anne (“Doc”) Waters about disability, indigenous/First Nations philosophy, transforming academia and other things:

Anne has lived with anxiety and depression for most of her life and is disabled in other ways. From her mother, she learned that privilege is something to be respected, never turned down directly, but rather transferred around, to be regenerated among less privileged people. She thinks that this is the most important lesson that she has learned about privilege and regards it as her own Native American principle of fairness. Her work also addresses the development in philosophy of transformative non-binary ontologies. She currently lives in her mother’s hometown of many generations, in the swamps of the Gulf of Mexico at the Tamiami Trail near the Withlacoochee River, where she spends much of her time hiking, writing poetry, and doing horticulture with her husband.

“We need a good, modest, conservative dress code for both the males and females,” state Rep. Nick King (R) said in an email to colleagues. “Removing one more distraction will help everyone keep their focus on legislative matters.”

Two months later, Sen. Paul LeVota (D) resigned after two interns accused him of sexual harassment. In a statement, he denied any wrongdoing.

But the problem appears to be more widespread. Dozens of women have said they were sexually harassed while working at the state capitol. In that report, a former state senator called the culture in Jefferson City “very anything goes.”

On Monday, state Rep. Kevin Engler (R) sent out a list of proposed changes for the program to his fellow House members. The Kansas City Star reported that that’s when several legislators, initiated by state Rep. Bill Kidd (R), responded by suggesting Engler should add an intern dress code to the list.