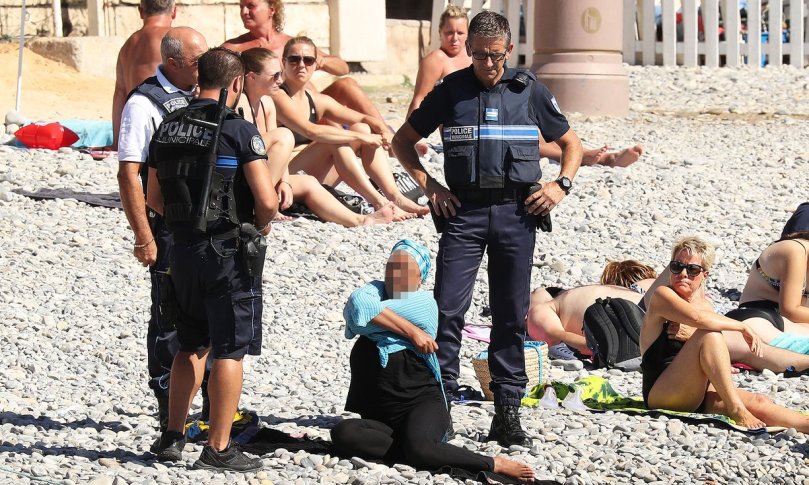 EDIT: As several readers have pointed out, it is not France but specific municipalities in France that have banned the burkini.

Some municipalities in France have decided to ban ‘burkinis’ on various beaches. This means that armed police can now, with the weight of the law behind them, stand over a woman lying on the beach and force her to remove her clothes, as can be seen in the picture above (taken from this Guardian article).

Notice that, as far as I can make out from the picture, this woman is not wearing a burkini. She is wearing a vest, leggings, tunic, and headscarf. Neither is she swimming, she is just lying on the beach. Thus, it seems the police can now force women wearing anything that looks vaguely Muslim on the beach to remove their clothes.

Indeed, the article linked to above tells of another woman:

[A] mother of two also told on Tuesday how she had been fined on the beach in nearby Cannes wearing leggings, a tunic and a headscarf.

Her ticket, seen by French news agency AFP, read that she was not wearing “an outfit respecting good morals and secularism”.

A witness to the scene, Mathilde Cousin, confirmed the incident. “The saddest thing was that people were shouting ‘go home’, some were applauding the police,” she said. “Her daughter was crying.”

Amongst the various ironies of this situation is the obvious comparison with the Islamic Republic of Iran’s religious police, who patrol the streets, cracking down on women who have failed to wear the correct clothing.

A tribunal in Nice upheld the ban on the burkini recently on the grounds that the garment might offend the religious or atheistic convictions of other beach-goers, and “be felt as a defiance or a provocation exacerbating tensions felt by the community”, in the wake of the recent Jihadi attacks in France – Nice being the location of the recent horrific truck massacre. The trouble is, of course, that banning the burkini will do nothing other than further alienate France’s Muslim population. To claim that someone’s sensibilities might be offended by seeing another person’s religious symbols implies that such a person might be offended by seeing that one is Muslim. One must hide one’s Islamic identity – not allow it to become visible because that is an act of defiance or provocation. And to say that such sensibilities must be protected in the wake of the Jihadi attacks is surely to imply that Muslims as a group bear responsibility for those attacks.

The justification for the burkini ban is no longer about ‘liberating’ women, as the above quote makes clear, but Arundhati Roy’s remarks about France’s earlier ban on the burka are still apt:

When, as happened recently in France, an attempt is made to coerce women out of the burka rather than creating a situation in which a woman can choose what she wishes to do, it’s not about liberating her but about unclothing her. It becomes an act of humiliation and cultural imperialism. Coercing a woman out of her burka is as bad as coercing her into one. It’s not about the burka. It’s about the coercion.

Armed police forcing women to remove their clothes on the beach is nothing other than an act of humiliation – humiliating women to punish a minority group for the actions of a few individuals.

9 thoughts on “France and the Burkini”