Clearing the notorious ‘Jungle’ settlement in Calais was always going to be somewhat chaotic. There are so many desperate people living there, and the French authorities have shown on many occasions that sympathy for the plight of the many refugees stuck at the border is limited. Some people who managed to register were sent to official centres and reported that conditions were good. They had their own rooms, food, toilet and shower facilities. But not everyone managed to register yesterday. When registration shut, there were several people, including approximately 300 unaccompanied minors, who were turned away and told to go back to the Jungle, despite the fact that the entire settlement was on fire. With nowhere to go, the grass roots organisations staffed by volunteers, worked hard to desperately find them somewhere to go, and to distribute blankets, food and water to them. Volunteers slept outside with refugees to try and safeguard people. A depressingly predictable situation.

You can read more here. 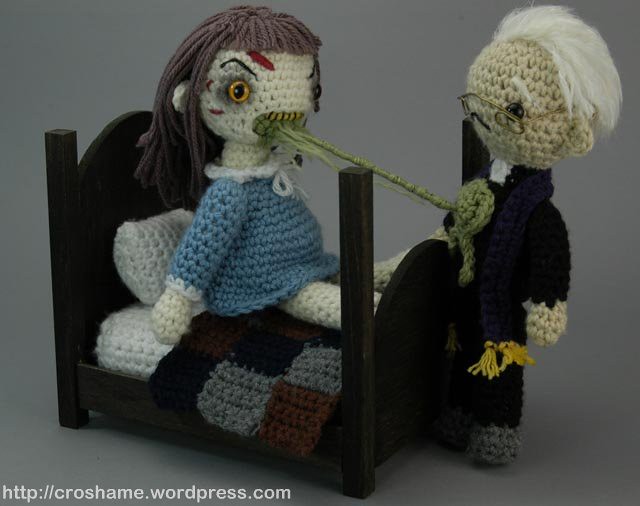 Over here at Feminist Philosophers, we always love to see ‘womanly’ crafts put to good use. So it’s a pleasure to reveal to you, Croshame’s crocheted Exorcist playset! You can see more of her amazing work over at her blog – including some crocheted Star Wars figures. Wonderful!