Many thanks to commenter Prime for the link to this powerful piece by Michael Harriot.

Many people were surprised when President Donald Trump suggested that NFL team owners fire players who quietly choose to sit out the national anthem before games, but I was not one of them.

Even though they thought they’d solved the anthem problem by blackballing protest starter Colin Kaepernick, the residual insolence displayed by the players roiled white people to no end because their protest was so disrespectful—not to a 250-year-old cloth logo or a Francis Scott Key bar song. Taking a knee is disrespectful to whiteness. It is not that white people can’t understand Kaepernick’s point of view; it’s that—to them—any other point of view is nonexistent.

For future reference, we have put together this handy-dandy checklist for designing a protest that white people will find inoffensive and respectable.

Dahlia Lithwick seems to be channelling a lot of ideas from the silencing literature!

So, when Colin Kaepernick explicitly says time and time and time again that he is protesting police brutality, he is wrong. And when another player, Eric Reid, said on Monday that players are taking a knee expressly not to protest the flag or the military, but to protest the “incredible number of unarmed black people being killed by the police,” he is also wrong. What Sanders and Trump are saying here exemplifies one of the most grotesque aspects of unchecked privilege. It transcends even patronizing lectures about how black men should protest in such a way as to avoid offending white people. This is an attempt to dictate—with the threat of job loss—the very ability of some black men to have and maintain control over their own speech. What the president and Sanders are claiming is that they are better situated than the actual speakers to understand what those speakers are saying. That takes us from privilege to silencing, and it’s not a move that should go unremarked.

The Philosophy Faculty at the New College of the Humanities (NCH) and the Duesseldorf Centre for Logic and Philosophy of Science (DCLPS) are pleased to announced the one-day workshop: Debating Debates.

The workshop aims to bring together scholars engaged in debating the conditions under which object-level debates are worth having and hence in the corresponding meta-level debates. Two specific areas are used as case studies: meta-ontology and the debate surrounding the scientific realism debate. We hope that by transcending the particularities of their areas, scholars can find out whether anything general can be said about when and why object-level debates are worthwhile.

The American Geophysical Union (AGU) Board of Directors has approved changes to the AGU Scientific Integrity and Professional Ethics Policy. The revisions adopted on 14 September were made in response to a June 2016 decision by AGU leadership, under then AGU President Margaret Leinen, to form a task force to review the organization’s ethics policy and practices in the wake of high-profile cases alleging sexual harassment in science…

Changes to the policy include identifying as scientific misconduct harassment, discrimination, and bullying in scientific endeavors.

Most notably, changes to the policy include identifying as scientific misconduct harassment, discrimination, and bullying in scientific endeavors.

Christia Mercer, in The Stone, on the way that the history of philosophy was rewritten, with the effect of making the women invisible.

This 19th-century invention of the “modern era” excised 17th- and 18th-century philosophy of its theological and religious underpinnings — and its women, whether they were overtly theological or not. Even influential Enlightenment figures like the natural philosopher, Émilie Du Châtelet, were ignored, not to mention the contributions of significant 17th-century radical thinkers like Margaret Cavendish and Anne Conway, a favorite of Leibniz.

I was travelling when this happened, so just hear about it today.

One ad for baby formula showed a little girl growing up to be a ballerina and a little boy becoming a mathematician.

Another ad, for a weight-loss drink, asked if viewers were “beach body ready” and showed a bikini-wearing woman whose bronzed image, critics said, promoted an unrealistic standard of beauty.

A third ad, for the video game “Game of War,” showed the American actress Kate Upton scantily dressed on a horse, making it seem as though sexual desirability were a prerequisite for leadership.

Britain’s advertising regulator, reacting to these ads and similar ones, announced Tuesday that new rules would be developed to ban advertising that promotes gender stereotypes or denigrates people who do not conform to them; sexually objectifies women; or promotes unhealthy body images.

So your department resists the idea of intentionally making a minority hire. They think the most just approach is to hire the best of the candidates. However, that recommendation assumes we can achieve a success that might be even more difficult than recent work on biases may make us aware.

One factor is that people in a particular ingroup tend to remember the excellencies achieved by members of that ingroup than those of members of an outgroup. (Gaertner, S. L., & Dovidio, J. F. (2000). Reducing intergroup bias : the common ingroup identity model. Philadelphia, PA: Psychology Press.) Supposing this is true, what will the effect be when a white male philosophers is asked to assess overall the quality of student contributions to a seminar he gave? He will have found the white male students, e.g., were sometimes particularly outstanding, while the white female students and minority members were often enough good, but not as outstanding as some of the others.

What it’s like when you photoshop men out of politics. 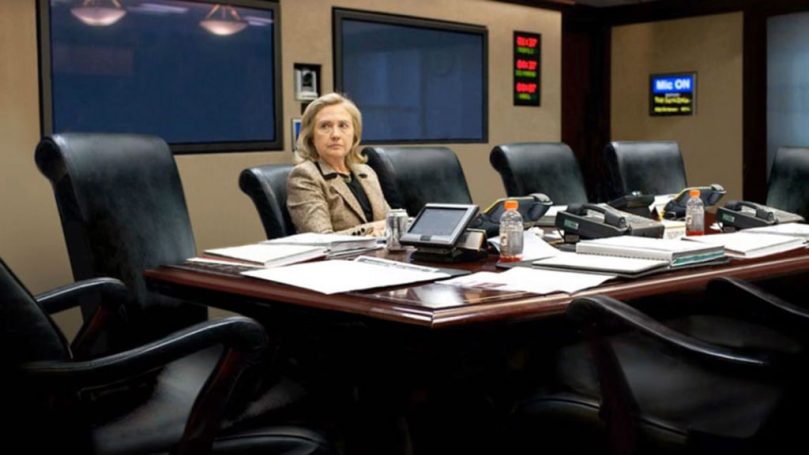 AS THE LIBERAL MIND STRUGGLES to regain its bearings in the wake of the catastrophic election of Donald Trump, the racial apologia that has long rested at the heart of elite liberalism has re-emerged as a cautionary tale about the wages of too much racial justice. Far from calling for the mobilization of every resource to resist the breathtaking resurgence of white nationalism, some self-declared liberals have called for the retirement of racial equity discourse in favor of a universalism that denies the continuing salience of racial power in America.

The Rorschach diagnosis of liberalism’s psychosis comes through most strongly in liberals’ reflexive response to the monstrous resurrection of lynch-mob mentality and its enablement in the White House. While scenes of white supremacy’s galloping return strike terror in the very soul of America’s dispossessed, the analysis that’s gained greatest currency among conflicted white liberals calls to mind D.W. Griffith’s infamous portrayal of the Ku Klux Klan leaders as the heroic vindicators of a humiliated white identity.

Surprisingly, this terrifying resurgence of white anger is not the chief object of liberal outrage; rather, we are told that what’s really precipitated today’s white-supremacist putsch are the excesses of identity politics. By the lights of today’s soothsayers, the beast has been agitated by the telling of tales about its own bloody reign.