Jared Mauldin, a senior in mechanical engineering at Eastern Washington University published the following letter in his campus newspaper. 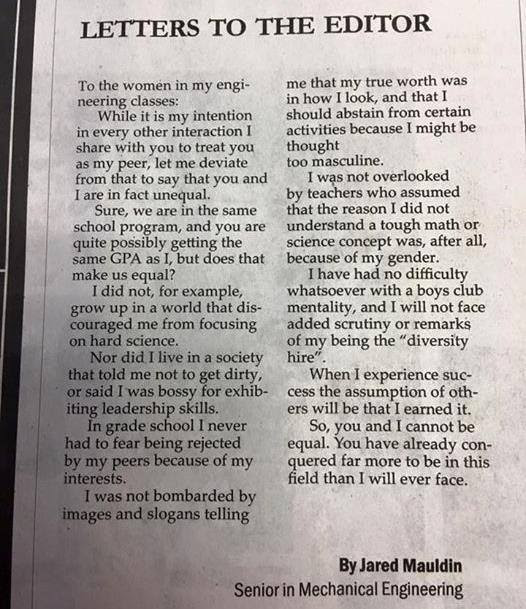 Yesterday, at his Digressions & Impressions blog, Eric Schliesser posted a (second) lovely discussion of 17th century philosopher Marie de Gournay and her account of the Church’s role in the subordination of women. Strikingly, de Gournay argues that, in having played this role, Christianity also oppresses men, by encouraging them to make idols of themselves.

For, men have chosen to let themselves be ruled by “superiority of…strength” (73) and not their rational faculty. In fact, she argues that in so doing men have committed “serious blasphemy” because men have elevated themselves above women. For, women are “worthy of being made in the image of the Creator, of benefiting from the most holy Eucharist and the mysteries of redemption and of paradise, and of the vision–indeed, the possession–of God.” (73) Man’s political decision to deny women “the advantages or privileges of man” is, thus, a way to make an idol of himself.

De Gournay’s argument is a powerful reply to the Pauline-Augustinian argument that woman only expresses God’s image when she is united to man (de Trinitate, Book 12, Ch. 7). I know what I’ll be adding to the syllabus the next time I teach philosophy of gender. Thanks, Eric!

Even in Scandinavia, well known for its large female political representation, public debate is dominated by men. Business conferences with a 100 percent male speaker lineup are not rare. Some of these men are tired of debating only men, and are taking action to change it.

In Sweden and Norway, male speakers are now refusing to participate in conferences and panel discussions without female representation.

The Representation Project has produced a documentary about how gender stereotypes affect men – and the way they are towards women. Another reminder that how women are perceived cannot be changed without looking at men differently too.

Another bit of the APA I was sad to miss was the session on Gender-Inclusive Conferences, which featured Kate Norlock, John Protevi and Jason Stanley.  (It was organised by Nancy Bauer.)  It sounds awesome– standing room only and really great papers and discussion.  I’m very pleased, though, to be able to post Kate’s powerpoints, the draft talks that Jason and John presented.

Here’s Kate’s talk: Why and How to Organize a Gender-balanced Conference

Some new fathers agonising about how to raise their sons in a culture of violence against women:

Tenure, She Wrote has a really wonderful list of rules for How not to be That Dude – ways for the male academic to be a helpful, gender-ally colleague.

At at the end of the list, I’m particularly fond of:

20. Finally, if you do all of the above, don’t expect a cookie. Your efforts may go unacknowledged or even unrecognized much of the time. Keep at it anyway, because you’re not out to get special recognition. You’re doing it because it’s the decent thing to do.

Read about how the hashtag got started here.

“The hashtag was originally coined by blogger Mikki Kendall during a Twitter debate about Hugo Schwyzer, an American academic and self-described “male feminist”. Schwyzer has been accused of harassing non-white female bloggers and recently wrote that his critics drove him offline.”

You can also read tweets with the hashtag here.

And you can see a Jezebel article here where many people in the comments call out the blog for praising the hashtag but erasing the WoC who created it. 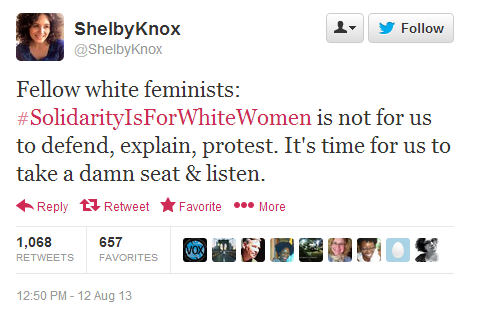