An interesting article over at the Atlantic on how gender stereotypes and the keyboard might have made it more difficult for the first laptop to catch on.

‘This is an amazing fact. We had this product. It was designed for business executives. And the biggest obstacle, one of the biggest obstacles, we had for selling the product was the fact — believe it or not — that it had a keyboard. I was in sales and marketing. I saw this first-hand. At that time, 1982, business people, who were in their 40s and 50s, did not have any computer or keyboard in their offices. And it was associated with being part of the secretarial pool or the word processing (remember that industry?) department. And so you’d put this thing in their office and they’d say, “Get that out of here.” It was like getting a demotion. They really were uncomfortable with it.’

Though Hawkins doesn’t quite say it. There is a distinct gendered component to this discomfort. Typing was women’s work and these business people, born in the 1930s and 1940s, didn’t scrap their way up the bureaucracy to be relegated to the very secretarial work they’d been devaluing all along.

Of course, it also cost something like $20,000 in today’s currency–still, this makes me wonder what interesting cases for agnotology we might find in forms of practical knowledge.

This will make a handy little addition to Feminism classes… (Thanks RW!)

A self-described “rule follower” went through an airport pornoscanner wearing a panty-liner (she was menstruating). Because the hygienic item obscured the screener’s view of her vulva, she was made to endure a humiliating fondling, “so invasive that I was left crying and dealing with memories that I thought had been dealt with years ago of prior sexual assaults.”

I came across this great comic about online sexism, and it’s so spot on, it needs sharing: 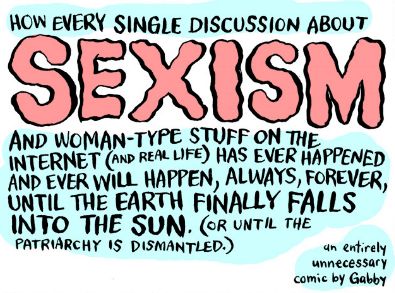 300,000,000 more men than women own a mobile phone. The Global System for Mobile Communications Association (GSMA) and the Cherie Blair Foundation for Women started a project, mWomen that was recently launched by Hilary Clinton.

The idea is to address this gender gap and

by increasing access to mobile connectivity and services, women living on less than $2 per day will achieve a greater sense of security, independence, economic opportunity and connection with the world outside their homes. This in turn will lead to greater empowerment and control over their lives and those of their families.

It’s in the last bit that there appears to be a bit of a rub. Who gets control, exactly?

Egyptian feminists have cast some doubt about the empowering powers for women of mobile phones, as can be read here (thanks @visualrights).

“Owning a telephone is positive because it gives women a space to communicate with the outside world and greater access to education. She can also get health and medical tips sent to her mobile,” said Abul Koumsan.

“But for women in Egypt, a mobile can be compared to a dog leash: her family constantly calls her to know where she is, even if she’s in the classroom or at university. And if she is unable to answer or in an area with no network, she could find herself in a very unpleasant situation once back home,” she adds.

She also mitigates the freedom a mobile offers a woman in Egypt because, “Her father or brother may very well monitor her mobile by looking through her SMSs and phones calls.”

And unfortunately, it’s happened before that girls and women get killed because it is suspected they shamed the honour of the family by having been on the phone with men, or even because the family found an unknown number on their phone, which happened with Shawbo Ali Rauf (19) in Iraq in 2008 (from this account here).

Tricky. What do you think?

I ran into this call (via Danah Boyd) for papers for a special issue of Interacting with Computers about Feminism and Human-Computer Interaction (HCI) that didn’t pop up in my mailing lists so I thought I would post it here.

[…] The “Feminism and HCI: New Perspectives” Special Issue seeks to provide a forum for scholarly contributions and applications of feminism to the discipline of HCI. Though the topic of feminism has many inputs and applications, we confine our focus to the interaction design implications of this problem space. Specifically, we are concerned with the design and evaluation of interactive systems that are imbued with sensitivity to the central commitments of feminism—agency, fulfillment, identity and the self, equity, empowerment, diversity, and social justice. We also seek to improve our understanding of how gender identities and relations shape both the use of interactive technologies and their design. Additionally, feminist HCI entails critical perspectives that could help reveal unspoken values within HCI’s dominant research and design paradigms, and underpin the development of new approaches, methods and design variations.

You can read the full text here.
And to get into the spirit, I will add this Geek and Poke cartoon here: