We examined the application and review materials of three calls (n = 2,823) of a prestigious grant for personal research funding in a na- tional full population of early career scientists awarded by the Nether- lands Organization for Scientific Research (NWO). Results showed evidence of gender bias in application evaluations and success rates, as well as in language use in instructions and evaluation sheets. Male applicants received significantly more competitive “quality of re- searcher” evaluations (but not “quality of proposal” evaluations) and had significantly higher application success rates than female ap- plicants. Gender disparities were most prevalent in scientific disciplines with the highest number of applications and with equal gender dis- tribution among the applicants (i.e., life sciences and social sciences). Moreover, content analyses of the instructional and evaluation mate- rials revealed the use of gendered language favoring male applicants. Overall, our data reveal a 4% “loss” of women during the grant re- view procedure, and illustrate the perpetuation of the funding gap, which contributes to the underrepresentation of women in academia.

21 and 22 May
Centre for the Study of Global Ethics, Department of Philosophy, University of Birmingham

To register, please email Scott Wisor at s.l.wisor@bham.ac.uk.
Information and accommodation, location, and final program times will be provided on registering.

Please note you can register for the evening public event on the 21st without attending the full conference.
END_OF_DOCUMENT_TOKEN_TO_BE_REPLACED

“One Classroom, Two Genders” Interesting reflections by Jennifer Finney Boylan on how gender norms and expectations factor into teaching from the perspective of someone who has taught as a man and as a woman.  Also, age.  For her, age seems to have brought some freedom, but surely also brings some challenges.

We’ve posted before about the man, Andrej Pejic, modelling as a woman. Earlier this week we saw another instance in this phenomena.

So its time to meet Casey Legler, the female male model. There’s an interview with her talking about her work as an artist and as a male model here. Interesting to see gender being treated so flexibly.

The NY Times reports on a year long study conducted by a Princeton economics student, Emily Glassberg Sands, whose work has been vetted by a number of excellent economists.  The study looked at the fact that many more plays produced are written by men than by women.  These are the conclusions reached:

1.  There are many more men than women playwrights and the men are more prolific.  Given that, men’s and women’s plays are produced at the same rate.

2.  A study, which sent a play to theater directors and literary managers around the country with the name variously a male or female one, indicated that men judge men and women equally, but women are more likely to favor the male writer.

3.  Women’s plays, when produced, are commercially significantly more successful, but they do not get any longer run time than the less successful men’s plays.  (A case of there being higher standards for woman to get treatment equal to a man.)

4.  “Plays that feature women — which are more commonly written by women — are also less likely to be produced”.  (One person’s quoted reaction said that the female characters were less likable; it was not possible to tell if this was supported by the research or an interpretation of it.)

Let me start off the comments.

I have heard the equivalent of 1 holds for the sciences; I am not sure about other fields, but I wouldn’t be surprised if it is true in most or all male  dominated fields.  The data in this case was drawn from a directory that depends  on self-reporting, so part of the difference could start with what is reported.  One reader comments that women are still socialized to believe that they will be wives and mothers in a way that puts other things second.  I am inclined to think rate of productivity may be influenced by having a sense of being a part of the community, having expectations that what one writes will be taken seriously, and so on.

2 is certainly unwelcome, but a reminder that women are equally likely to have implicit biases; if we simply assume we  are more fair, we may well be less fair.

Now, please, do join in and tell us what you think!

Apparently, those with sisters grow up to be happier than those with brothers.

“Sisters appear to encourage more open communication and cohesion in families. “However, brothers seemed to have the alternative effect.

So I guess Jender-Brother (or J-Bro, as I like to call him*) had an easy time thanks to my lovely influence. But it didn’t stop him from messing me up. Or maybe we canceled each other out– there I was, trying to encourage emotional expression, and there he was stamping it out at every turn! The article contains no reflection on families with only children, and gives no indication of whether those under discussion came from families with children all of one sex. Also little reflection on the pernicious effect it might have to tell parents or expectant parents that their boys can be expected to make family life less happy. Whee! Thanks(?) Jender-Mom, for sending that one on!

*I think it helps with the bonding. I’m like that.

“I know that I don’t look like everybody else on television,” she recently told The Washington Post. “Women on television are over-the-top beauty-pageant gorgeous. That’s not the grounds on which I am competing.” – Rachel Maddow (pictured below) 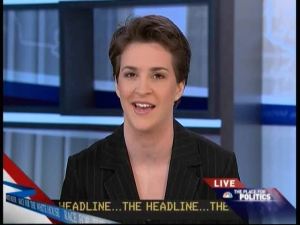 Originally I was going to write about this older article in which MSNBC and Air America pundit Rachel Maddow talks about surrendering to wearing “lady clothes.” But in doing a Google search today on her, I came across another article, “The High Heel Vote,” in The Independent on how the US election is is “really all about women.” (The connection is the quote at the top, to which I’ll get in a moment.) END_OF_DOCUMENT_TOKEN_TO_BE_REPLACED

As many of you may know, it’s been very well-confirmed that people react to newborns very differently based on their perceived sex. Stick ’em in pink and they’re all tiny and delicate. Stick ’em in blue and they’re strong and alert. Yesterday, Mr Jender took a phone call from a baby group friend, letting us know that his wife had just had a baby girl. She is, apparently, very large: over 9 pounds. And she has a huge head, far above the average. This was immediately followed by “She’s so delicate, so feminine!” Just more proof that anything at all counts as feminine, if you really want to think so. (New father went on to explain that he was feeling utterly baffled at how to deal with this new baby, because he knows how boys think, but not how girls think. Mr J politely tried to reassure him that it probably wouldn’t be all that different for quite a long time.)

Have you had similar experiences? Please do tell us about them in comments– these sorts of stories are always very useful for teaching!

Let’s just alternate these terms. They’re synonyms anyway, right? (And yes, I know I’m focusing on a rather superficial aspect of some stories that actually raise really troubling issues. But sometimes I have to let the inner pedant out to play.) Thanks, BTPS.