Especially when it has cats in its special exhibits and then even if there’s a blizzard outside.**

One special exhibit was the  work of the  conceptual artist, Gabriel Orozco: 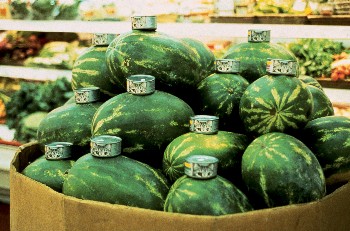 In the artist’s playful recontextualization, the repetition of the cat’s face on the cans’ labels unexpectedly animates everything else in the picture, even our own expectations of what art is.

Which, when you think about it, just makes sense.

Far  more arresting was the exhibit of work by William Kentridge, a South African artist, some of whose work is imbued with tragic themes  reflecting the guilt felt by those who exploited black Africans.   Asked about the cat in the series of films of which this is one, Kentridge said that it doesn’t symbolize anything, and  that he just felt a cat was needed.

Do have a look at the explanation that  follows:

Sobriety, Obesity and Growing Old is the fourth film in the series. It was made from twenty-five drawings and features Dvorak’s String Quartet in F, Opus 96, choral music of South Africa, and the M’appari aria from Martha by Friedrich von Flotow, sung by Enrico Caruso. It picks up the narrative and themes begun in Kentridge’s first film, Johannesburg the Second Greatest City after Paris (Tate T07482), and follows the development of the relationships between his cast of invented characters, Soho Eckstein, his wife and her lover, Felix Teitelbaum. These relationships reflect, metaphorically, the changing political situation in South Africa at the time the film was made. Demonstrations and marches in opposition to the apartheid régime together with the governmental relaxation of most of the State of Emergency regulations and restrictions heralded the beginning of a change in the country’s power structure (and white attitudes towards black African rights). Soho, a symbol of South African white power, develops the capacity for awareness, longing and love and the potential for guilt and repentance. This is played out through the loss of his wife to Felix (his emotional alter-ego) which climaxes, through the couple making love, in the crumbling of the buildings of Johannesburg as megaphones declare a state of emergency. Soho is left alone with a cat in a vast open landscape and the words ‘HER ABSENCE FILLED THE WORLD’. In the final scene of the film Soho has had to recognise the magnitude of his grief and longing, and lies, still wearing the business suit which symbolises his social position, embracing his naked wife in the middle of a field, where they gradually become submerged under rising waters. Crowds of black protestors, who had appeared marching through a 1950s version of Johannesburg earlier in the film, have receded to a respectful distance as Soho has found a connection to his feelings and hence his land.

This is just the sort of thing I worry about when I see students looking starry-eyed at father figures that are teaching their classes.  From the NY Times:

Dorothy Jane Mills was supposed to feel honored last Monday when the Society for American Baseball Research included her husband, Dr. Harold Seymour, in the inaugural class of the organization’s new de facto Hall of Fame. She was supposed to feel thankful that her assistance with Seymour’s seminal three-volume history of baseball, published sequentially from 1960 through 1990, would be acknowledged during his induction.

But Mills felt neither honored nor thankful. Instead, resentment that had percolated within her for 50 years — over how she had, in fact, co-written those books but received no credit — boiled over into heated discussions of historical record, academic honesty and what can best be described as intellectual spousal abuse.

The controversy ended Wednesday with the organization, known as SABR (pronounced say-ber), telling Mills that she would be honored equally with Seymour. But only after she had relived a time in her life she can forgive even less than forget.

How did this happen?

“Everyone assumed that he had done all that work by himself — that’s what he wanted them to assume, but we were equal partners,” said Mills, 81, working on her 26th book at her home in Fort Myers, Fla. “All these things were done jointly. He just couldn’t share credit. And I didn’t say anything at the time, because at the time, wives just didn’t do that.”

At another point she says she felt comfortable with her role, a statement somewhat at odds with the idea that resentment percolated for 50 years.

One thing that is worth wondering about is how often this sort of thing has happened.  And does it continue today?

There’s been a 52% rise in the number of men applying to be primary school teachers, a profession traditionally 80% female. Explanations given include teaching’s “increasing status” as well as the recession. I’ve heard that status of a profession often increases *as a result* of male involvement, so it would be interesting to know the temporal sequence for this. At any rate, it’s surely a good thing for kids to be exposed to men as well as women in this role. For more, see here. (Thanks, AP!)