The recent and ongoing unrest in North Africa, including the civil war in Libya, has led thousands to flee their homes and make for a safe haven. For many, that has been a small island called Lampedusa, off the coast of Sicily. The Italian authorities now have the problem of dealing with these refugees, which – for anyone who knows a bit about the workings of Fortress Europe – is not just a practical issue, but a politically charged matter. The authorities need to act quickly, however, as Amnesty reports that the refugees are existing in appalling conditions. Italy has started to take migrants to the mainland, but communities in the South of Italy are angry that they are bearing the brunt of caring for them. Italian leaders also feel that other European countries are not doing enough to help.

She has been found.  She was indeed in the snake house the whole time. 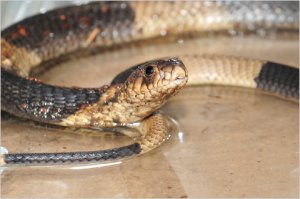 In case you are suffering from 21st Century ennui:

You will have heard about the little cobra – very young and just 20 inches long – who holds the cards in a game with the Bronx Zoo, as its director sees it:

We understand the interest in this story and that everyone wants us to find the missing snake,” James J. Breheny, the zoo’s director, said in the statement. “Right now, it’s the snake’s game. At this point, it’s just like fishing; you put the hook in the water and wait. Our best strategy is patience, allowing her time to come out of hiding.”

“The holding areas of the reptile house are extremely complex environments with pumps, motors and other mechanical systems,” Mr. Breheny said. “In this complex environment, she will likely remain in hiding and not move until she feels completely secure. As her comfort level rises, she will begin to move around the building to seek food and water.”

(Of course, one hopes that not everything in NYC is seen as a power contest, and that the snake’s welfare is really being thought of.)

In the meantime, she has acquired a twitter account and appears to be sampling NY City. The Christian Science Monitor has picked what it considers her best four tweets, which include the following:

Dear NYC, Apples and snakes have gone together since the beginning

A charming graphic in the CSM 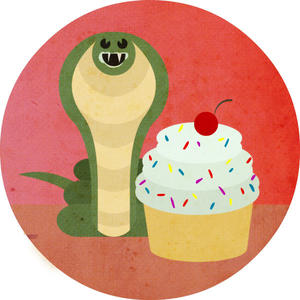 “Enjoying a cupcake @magnoliabakery. This is going straight to my hips. Oh, wait. I don’t have hips. Yesss! #snakeonthetown”

The tweet captures an American & too often gendered anxiety.

Finally, for all those discussing this whole episode in terms of what “he” is doing, this one is a she!

What is it Like to be a Woman in Philosophy has now re-opened for stories. In the week of 11 April, posting will resume.

Soon there will also be a new sister blog, What We’re Doing About What it’s Like, designed to focus on positive actions taken by individuals or departments in response to What it’s Like.

Here’s a statement from the Chair, Kath Jones:

The situation: The management of the School of Humanities has closed recruitment to the Philosophy programme with immediate effect and are writing to students who have already been given places for Sept 2011 to tell them that these are no longer available. The management are recommending that the Philosophy BA be closed down. This recommendation has to pass through the Academic Planning Committee before it is formally set in stone (but this is only a formality unless we can interrupt it). The Philosophy team were not invited to take part in any of the discussions leading up to this decision, and they have not been presented with any written document detailing the argument for the closure of the programme. The partial statistics that were presented at a school meeting yesterday are out of date and do not in any obvious way support the decision. We have requested proper documentation from the Head of School, but have still not received it. The British Philosophy Association is writing a letter asking the University not to close the programme, which will be signed by Heads of Philosophy departments at other Universities. Past and present students are meeting at the Student Union on Monday at 5pm to discuss how best to protest against the decision. Letters from past students are available (from me) to use for letters to newspapers or anything else.

And here’s the Facebook Group for up to date info on what’s happening.

THE INAUGURAL EVENT ON

The concept of bias has played a key role in shaping feminist epistemology and philosophy of science. It is not, however, an uncontested concept. Feminist philosophers disagree amongst themselves on how the concept should be understood, and whether bias is inevitable. They further disagree on how feminists should respond to and deal with bias. For instance, are biases always detrimental to our knowledge seeking activities? Or, can certain explicit biases (like feminist and anti-racist ones) make our epistemic practices more robustly truth-seeking?

More recently, political and ethical discussions have started making use of the concept of bias. Both philosophers and psychologists alike have begun examining certain sorts of widespread implicit biases about members of stigmatised social groups. The holders of these biases are generally unaware of them, and often have sincere and explicit egalitarian beliefs. On one understanding, implicit biases are unconscious prejudices that unduly affect our ways of both positively and negatively perceiving, evaluating, and interacting with others. The recognition and analysis of such biases has wide-ranging consequences for feminist philosophy and politics, as well as for every other movement seeking social justice. Implicit biases may explain why members of particular groups still find it hard to ‘make it’, despite the lack of overt obstacles to positions of power and authority.

Given its centrality to a number of feminist debates, this conference examines the notion of bias (broadly conceived). We invite submissions on the following suggested topics:

* How should we understand bias, both explicit and implicit? Should these phenomena both be called ‘biases’ or should a clearer conceptual distinction be drawn?
* What is the upshot and impact of implicit biases on feminist epistemological analyses? Does the existence of bias (in general) suggest that feminists should naturalise epistemology? What political benefits (if any) would such naturalised approaches have?
* Is implicit bias ubiquitous and does it always unduly affect our evaluations of others? Can implicit biases help us get things right? How should feminists respond to implicit biases?
* How does the existence of implicit bias affect other politically and morally important notions like those of justice, collective action and responsibility? If implicit bias is ubiquitous and ineradicable, can we hold people morally responsible for their views and/or conduct?

Our discussion is not, however, limited to these topics. Furthermore, although the focus of the event is on bias relevant to specifically feminist analyses, we welcome philosophical work on bias that is relevant to other analyses as well.

This conference also serves as the inaugural event for the new Humboldt-Universität zu Berlin Symposium Series Feminist Philosophy and…. It will be followed by bi-annual further events on topics relevant and of interest to feminist philosophers and all philosophers working on issues to do with social justice. Planned future topics include Feminist Philosophy and: Gender, Pornography, Race, Sex work.

Please email FULL PAPERS suitable for anonymous review of around 3,500 words (to be delivered in 30 min followed by 15-20 min of discussion) by 21st APRIL 2011 to Mari Mikkola (mari.mikkola AT hu-berlin.de) with the subject title ‘BIAS SUBMISSION’. (PDF submissions are preferred.) Notification of acceptance will be send around 31st of May 2011. We hope to be able to provide postgraduate and unwaged travel bursaries for accepted papers.