With the Carnival of Feminists coming up, I thought it would be wonderful to have some mention of feminists writing in very different geographical areas.  I’m now muttering to myself about colonialist assumptions of the accessibility of different cultures.

In fact, I’ve found a wealth of reports of feminist actions in Africa, and some stunning material from Asia, but my hopes of finding the sort of list that could easily appear down in the blogroll of Western feminist blogs are considerably less bright.  There are lists alright, but of a different sort, despite the name “blogroll.”  Very often they contain something more like the names of internet newspapers with a puzzling mixture of Western bloggers.  Perhaps blogging is more suited to those with spare time?

There are other difficulties that have arisen, some interesting enough to deserve a separate post.  One of them is that one finds amazing and distracting stories of women doing quite remarkable things, such as that of a former CNN employee who is now teaching in Hong Kong and has provided internet forums for a global mixture of voices.  More of that later on.

If you know of feminist bloggers in African or Asia, I would be very grateful if you’d share their names with us. 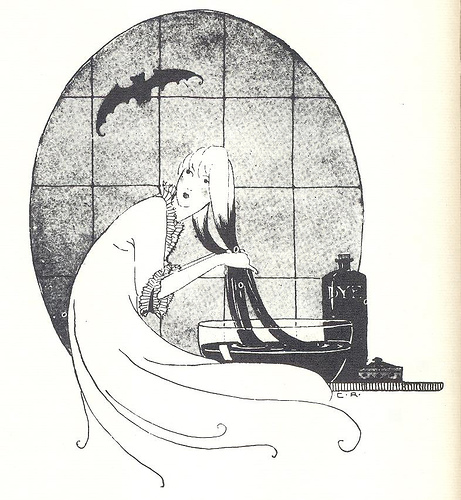 Reader Calypso sent us this very interesting article on gray hair. Of course, I’ve been aware of the fact that gray hair is considered more acceptable on a man than on a woman, and I’ve been aware that lots of women dye their hair. But I’d never really thought about just how widespread hair dying must be. Think about this:

of the 16 female U.S. Senators — the highest number ever — who range in age from 46 to 74, not a single one has visible gray hair.

The article makes some rather dubious claims about the cause of hair dying, however:

The idea seems to be that feminism has led to women in positions of power, and nobody trusts a gray-haired woman in a position of power. Hence, feminism is responsible. But the real question is why nobody trusts a gray-haired woman, when gray-haired men are considered eminently trustworthy, and it doesn’t seem likely you could blame feminism for that one. Also, umm, plenty of women are simply not in positions of power, so the explanation would be pretty limited even if it made sense.

Still, there’s interesting stuff in the article. For example, the author reports a surprising anecdote: as part of her research, she placed personal ads online with photographs of herself with either gray or brown hair, and got far more responses to the gray hair ad. Maybe she just looks great gray, or maybe (as some in the article suggest) gray is beginning to become cool.

Calypso notes (without naming names, so don’t go asking!) that there are many women philosophers who dye their gray hair. Is there the same pressure for non-gray hair in academia as there is in the Senate? I’m pretty sure the pressure is lower, but it may still be there.

Anyway, a really useful example to discuss in classes: Unless you have it pointed out, you don’t really realise just how widespread hair dying must be.